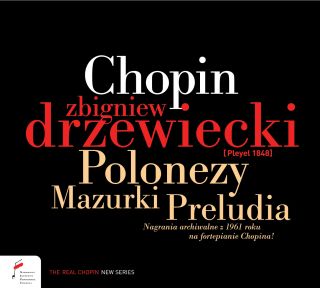 Catalog number: NIFCCD 043
Releasedate: 11-03-16
- A unique release: a 1961 recording by a great Polish pianist, Zbigniew Drzewiecki, who plays on a Pleyel piano dated 1848.
Unique release by The Fryderyk Chopin Institute - in the series The Real Chopin. This is an archival recording with a selection of  polonaises, mazurkas and preludes - played on authentic piano. The recording is dated 1961 and it's a recital by Zbigniew Drzewiecki - outstanding figure in the history of Polish pianism, the legendary educator and co-initiator of the Chopin Competition. The artist played the piano Pleyel from 1848, which now is in the Fryderyk Chopin Museum in Warsaw. The booklet contains an essay by Professor Benjamin Vogel, a prominent expert on historical instruments, which displays the specifics of historical pianos.
Zbigniew Drzewiecki, Polish pianist and teacher. He started playing the piano under the guidance of his father. He studied at the Institute of Music in Warsaw with W. Oberfeldta, F. Konopaska and R. Becker and I. Pilecki (music theory and violin). 1909-1911 he studied Engineering in Vienna and Brno, continuing his musical studies informally; 1911-1915 studied in Vienna with M. Prentner, assistant Leschetizky. In 1916 he made ​​his debut as a pianist in Warsaw. He has performed throughout Europe, performing works by Chopin, Bach, Beethoven and contemporary Polish composers. In 1928 he was briefly a student of Paderewski in Switzerland. He left recordings of the Nocturnes, Op. 15, Op. 72 No. 1, Etudes, Op. 25, No. 7, Mazurka, Op. 33, No. 1 (1948-1959, ed. Muse). In 1916 the Institute of Music in Warsaw began a teaching career, which he ran until his death. In 1931 he was rector of the Academy of Music in Warsaw, he also lectured in Cracow and Lwow. In 1945 he was one of the founders of the Academy of Music in Krakow, where he lectured in the years 1945-55 and served as the first rector (1946-1952). In the years 1955-1961 the piano class at the Academy of Music in Warsaw. Has had a huge influence on several generations of pianists, his students were the winners of the Chopin Competition - R. Etkin, B. Con, J. Ekier, H. Kalmanowicz, H. Czerny-Stefańska W. Maciszewski, R. Bakst, A. Harasiewicz, F. Ts'ong, L. Grychtołówna, M. Sosińska, H. Nakamura, moreover R. Smendzianka, F. Blumental, W. Kędra W. Kisielewski and others.His disciples gave metrorytmicznego commitment to rigor, soft expression, sense of form;regarded as the doyen of the new "tangible" generation of Polish pianism, breaking with the excesses of nineteenth-in. Romanticism. He was one of the initiators of the Chopin Competition in Warsaw, and then a juror all its editions from 1927 to 1965, since 1949, serving as chairman of the jury. In the years 1934-39 and 1945-48 he was president of the Polish section of ISCM, 1956-62 president of SPAM, 1959-1966 president of the Chopin Society. Also he worked as a music journalist and editor edition of the sheet music.