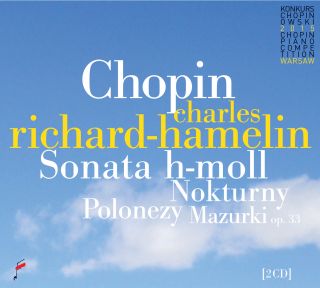 One unprecedented feature of the 17th International Fryderyk Chopin Piano Competition was the dominance of North American players, making up four of the six prizewinners. Not only that, but Canada appeared in the rankings for the first time in the competition’s history, twice over, with Yike (Tony) Yang coming fifth and Charles Richard-Hamelin being placed second. Many in the audience actually expected that the Quebec-born pianist would come out top, and although this is hardly the place for such speculation, it’s indeed quite possible that he would have done so if nerves hadn’t got the better of him in the finale of his concerto. The Final had itself marked him out as a different sort of artist from the rest of the pack: Richard-Hamelin was the only one of the ten pianists who elected to play the Concerto in F minor—and although, as he candidly admitted, he had chosen to play it because it was the only one of the concertos he knew, the subtler interpretative challenges of this piece usually seem to appeal to a special sort of artist.
Richard-Hamelin attracted attention right from his First Stage appearance. Ró ̋a Âwiatczyƒska, from Polish Radio 2, wrote in the Chopin Courier: ‘I had been waiting for such a performance since the beginning of the Competition. He is every inch the artist, an extraordinarily mature musician who focuses on the beauty of Chopin’s works, which he performs with a high degree of consciousness. He is one of the few who can find a wise balance between the spirit of Chopin and his own individuality, which he demonstrated, for instance, in his masterful interpretation of the Ballade in A flat major.’ After the Second Stage, Jakub Puchalski, in the same publication, praised his sense of construction and ‘compelling creations’. His Third Stage recital was commended in the same publication by Dorota Szwarcman, who singled out his Sonata in B minor in the wider context of an excellent programme.