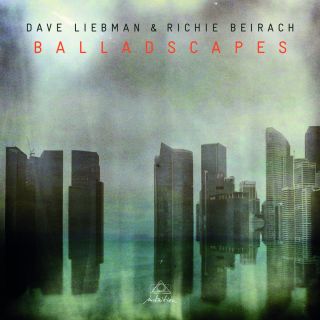 - Both are known to every Jazz lover.

As a setting, the duo fosters one of the purest forms of musical dialogue. It also allows the kind of freedom that can lead to endless rubato and loquacious solos that get lost within themselves. The music that Dave and Richie have created is always grounded in strong content and intelligence, regardless of context and genre. As is heard in bold relief here on “Balladscapes”, Beirach is the secret weapon here. According to Dave, “In any band we’ve ever been in together, Richie’s the anchor, more than the bass and drums. His time is perfect.” That firm sense of time along the unique sonority created by Dave’s soprano sax and Richie’s touch give this project its shape and sound. On a few pieces, Dave switches to tenor sax giving their sound more heft, but the stately passion that informs their music is maintained throughout. Over the years, these two have used ballads in their performances and recordings, but this is the first all-ballad album they’ve done. And it’s quite unusual in its approach. The program offers some originals (new and old), but includes far-ranging material from Bach, Weill, Jobim, Strayhorn, Shorter and Coltrane. Beirach and Liebman take fewer liberties with the material that one might expect and the music is better off for that restraint. This is a gorgeous, mesmerizing chamber music recital. And like all great music, it bears fruit with every repeated listening.
Richard Alan Beirach was born on 23 May 1947 in Brooklyn, New York City. In the middle of the 1960s, Richard Beirach entered the New York club scene, played innumerable gigs and jam sessions, with, among others, Freddie Hubbard and Lee Konitz. Soon afterwards, he played in the band of Stan Getz, together with bass player Dave Holland and drummer Jack deJohnette. In the 1980s, Richie Beirach focused increasingly on the solo piano and, parallel to that, on the cooperation with David Liebman in their duo and in the band "Quest", which they founded together in 1981, with drummers Billy Hart and Al Forster and George Mraz or Ron McClure on the bass, respectively. Since 2000, Richie Beirach lives in Leipzig and holds a professorship for Jazz piano at the Leipzig conservatory "Felix Mendelssohn-Bartholdy".

NEA Jazz Master David Liebman’s career has spanned nearly five decades, beginning in the early 1970s as the saxophone/flutist in both the Elvin Jones and Miles Davis Groups, continuing as a bandleader since.  He has played on over five hundred recordings with nearly two hundred under his leadership or co-leadership.  In the jazz education field he is a renowned lecturer and author of several milestone books: “Self Portrait Of A Jazz Artist,”  “A Chromatic Approach To Jazz Harmony And Melody,”  “Developing A Personal Saxophone Sound,” (translated into multiple languages), in addition to teaching DVDs, journalistic contributions to periodicals and published chamber music. His autobiography “What It Is” (Scarecrow Press) is a fascinating look into  Lieb’s career.
Lieb is the Founder and Artistic Director of the International Association of Schools of Jazz (IASJ) since 1989, which is a worldwide network of schools from nearly 40 countries. Liebman’s awards, besides the NEA honor, include the Jazz Educators Network (JEN) Legends of Jazz (2013); the Order of Arts and Letters (France 2009); Jazz Journalist’s award for Soprano Saxophone (2007); Grammy nomination for Best Jazz Solo (1998); Honorary Doctorate from the Sibelius Academy (Finland-1997).  He is currently Artist in Residence at the Manhattan School of Music and guest lecturer at both the University of Toronto and Berklee College of Music.  Dave has consistently placed in the top positions for Soprano Saxophone in both the Downbeat and Jazz Times polls since 1973.