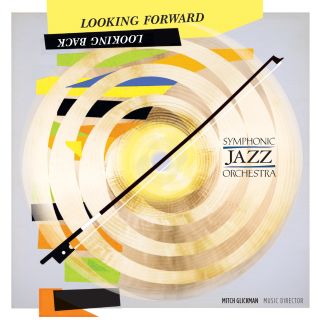 - George Duke was one the motors behind this disc, the recording project took on a new personal meaning after the premature passing of Duke

The phrase ‘symphonic jazz’ was coined by bandleader Paul Whiteman in 1924 following the wildly successful premiere of “Rhapsody in Blue,” a work he commissioned from a then little-known composer named George Gershwin.

Fast forward to 2015, and the 67-member Symphonic Jazz Orchestra continues this important tradition through 14 years of commissioning new works and performing music that combines the worlds of jazz and classical.

Their debut recording, Looking Forward, Looking Back, completes their historically focused mission originally conceived by founding Music Director Mitch Glickman and famed keyboardist/composer/producer George Duke. Duke was featured in concert with the SJO throughout his involvement and was commissioned to write a new work for the orchestra featuring bassist Christian McBride. The following year, plans were underway to record Duke’s commission along with another newly commissioned work from guitarist and composer
Lee Ritenour entitled “Symphonic Captain’s Journey.” The work that launched the symphonic jazz tradition “Rhapsody in Blue,” is also included on the recording with piano soloist Bill Cunliffe.

In 2013, Duke captured the arc of the works they planned to record by naming the album Looking Forward, Looking Back; but as pre-production plans were underway, the recording project took on a new personal meaning after the premature passing of Duke.
The Symphonic Jazz Orchestra (SJO) is comprised of Los Angeles’s finest studio musicians and jazz soloists. Over the years, such world-class soloists as Dave Grusin, Christian McBride, Raul Midón, Luciana Souza, Lee Ritenour, and Yellowjackets have joined the ensemble. The SJO has commissioned twelve new symphonic jazz works, along with six world premieres and three U.S. premieres.