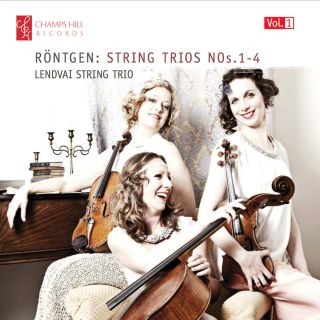 - the four string trios on this first CD are short, varied and generally very playful, with a certain joie de vivre. The form of the individual movements is recognizably classical in structure with occasional contrapuntal episodes.

This wonderful project of discovering, performing and recording the complete 3 string trios by Julius Röntgen has been a truly monumental and tremendous experience for us; to present this first disc is a dream come true. Our journey began in 2007 when we stumbled across Röntgen's first string trio (the only one published to date), and soon after discovered that there are fifteen more, carefully stored in handwritten manuscript form in the Netherlands Music Institute in the Hague. Intrigued, we began to investigate further, and to our astonishment realised that none of these wonderful works had been performed in public, let alone recorded. It has been a privilege to be the first ensemble to rediscover these string trios which have been archived in the library for over 80 years. Reading and playing from the old handwritten scores, instead of the usual computer-published sheet music we are used to, has added a very personal touch to the journey. Thanks to the Kersjes Prize and Champs Hill Records we have been able to record and bring to life this colourful and captivating music, which we hope you will 11 enjoy as much as we do.
Röntgen wrote sixteen String Trios, fifteen of which have never been published. For the most part, the Trios were also neither numbered nor named by the composer (an exception being the Walzer Suite), leaving the year of composition and key signature as the only means of their identification.
For someone who had starting composing in his teens, it is surprising that Röntgen came to the genre of String Trios only later in life, completing his first trio in 1915 at the age of 60 and the last trio in 1930, two years before his death. The reasons for this remain obscure, but it is clear that chamber music played an important part in Röntgen’s life. In 1912, he formed a professional piano trio with two of his sons from his first marriage (Engelbert, a cellist, and Julius Jr., a violinist). With this ensemble, he gave concerts for years. However, Röntgen had another favourite instrument, the viola, and with two sons from his second marriage (Edvard and Joachim), he played string trios, presumably only at home, where he himself played the viola parts.
The four string trios on this first CD are short, varied and generally very playful, with a certain joie de vivre. The form of the individual movements is recognizably classical in structure with occasional contrapuntal episodes. A unique feature of these works is its numerous references to traditional Dutch tunes and dances. Röntgen’s interest in folk music was largely due to his friendship with Edvard Grieg, with whom he travelled through Norway in search of Norwegian folk songs. For Röntgen it became important to do the same for the traditional music of Holland, and he considered the dissemination and popularization of his national music as one of his most important tasks. The fact that traditional Dutch music had not yet won the public’s appreciation was perplexing to him, as he considered these tunes to be representative of his nation’s strongly individual character. In his later years, his interest led him to dabble in film music for what he called a ‘national epos’. One such project was a collaboration with director Dirk Jan van der Ven (1891-1973) on a film about Dutch life in summer; it was shown in theaters with Röntgen providing accompaniment at the keyboard.