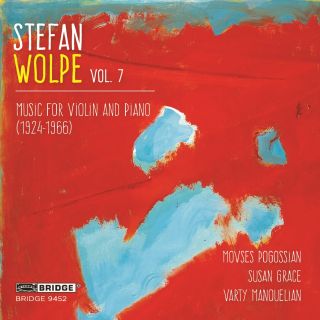 Volume 7 - Music for Violin and Piano

Catalog number: BRIDG 9452
Releasedate: 04-03-16
- a valuable addition to the rediscovery of an important composer who worked in Felix Austria before fleeing to USA.
As a child Stefan Wolpe studied the violin and the piano, and by his teens he wished to become a concert pianist and composer. His life transformed when, at the age of 18, he visited the Bauhaus at Weimar and sat in on the Preliminary Course of the painter and progressive educator Johannes Itten. Throughout his life Wolpe maintained that art has the power to transform the individual and society. This remarkable collection of Wolpe's music for violin(s) and piano includes several premiere recordings (the spectacular op. 2 Duo for two violins, the two studies of 1933, and the fragment of a second violin sonata). In addition it includes Wolpe's two late violin solos, and his magnificent and epic 1949 Sonata for Violin and Piano. The featured violinist on all the works is the Armenian/American virtuoso, Movses Pogossian.
Armenian-born violinist Movses Pogossian made his American debut performing the Tchaikovsky Concerto with the Boston Pops at Symphony Hall in 1990, about which Richard Dyer of the Boston Globe wrote: “There is freedom in his playing, but also taste and discipline. It was a fiery, centered, and highly musical performance...” Movses Pogossian has since performed with orchestras such as the Brandenburger Symphoniker and the Halle Philharmonic in Germany, the Sudety Philharmonic in Poland, the Tuscon Symphony, the El Paso Symphony, the Scandinavian Chamber Orchestra of New York, and the Toronto Sinfonia. His recent and upcoming performances include recitals in New York, Boston, Ann Arbor, and concerts in Korea, Japan, Germany, Armenia, and Cyprus. He is a Prizewinner of the 1986 Tchaikovsky International Competition, and the youngest-ever First Prize winner of the 1985 USSR National Violin Competition, previous winners of which included David Oistrakh and Gidon Kremer. An active chamber musician, Mr. Pogossian has performed with members of the Tokyo, Kronos, and Brentano string quartets, and with such artists as Kim Kashkashian, Jeremy Denk, Lynn Harrell, Ani and Ida Kavafian, and Rohan de Saram. He frequently collaborates with the Apple Hill Chamber Players, teaching annually at their summer music festival in New Hampshire. Movses Pogossian is the Artistic Director of the critically acclaimed Dilijan Chamber Music Series, which performs at Zipper Hall in downtown Los Angeles, and is currently in its ninth season (http://dilijan. larkmusicalsociety.com). Since earning his advanced degrees from the Komitas Conservatory in Armenia and the Tchaikovsky Conservatory of Music in Moscow, Mr. Pogossian has held teaching positions at Duquesne, Bowling Green, Wayne State, and SUNY Buffalo Universities. His principal teachers were L. Zorian, V. Mokatsian, V. Klimov, and legendary Louis Krasner. Movses Pogossian is currently Professor of Violin at the UCLA Herb Alpert School of Music. He resides in Glendale, California with his wife, Los Angeles Philharmonic violinist Varty Manouelian, and their three children.