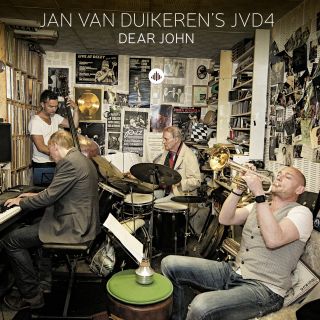 - Many people have listened to Jan van Duikeren's trumpet playing, but never realised it, he is a steady force in many brass sections for both pop musicians (Marco Borsato, Trijntje Oosterhuis, Candy Dulfer) and jazz orchestra (Jazz Orchestra of the Concertgebouw)

Dear John contains new compositions by Jan van Duikerena nd personal favorites of John Engels. Jan van Duikeren is a steady force in many brass band sections and performs with pop musicians however he's gone primarily unknown until recently. His friendship with drummer John Engels inspired him to record this album and highlight his favorite compositions. Jan performs in Japan almost every year and John, who turned eighty recently, performs live often, most recently with Chet Baker.
Jan van Duikeren
With his distinctive sound and energetic and lyrical approach, Rotterdam-based trumpet player Jan van Duikeren (1975) now ranks among a new generation of prominent musicians in the Dutch jazz scene. His extensive musical interests and outstanding versatility have ensured his success as a much sought-after solo player and side-man.

Besides the JvD4, Projects under his own name include Jan van Duikeren’s Fingerprint, Jan’s solo project with the Jazz Orchestra of the Concertgebouw called Scribblin’  (both available on challenge records), and the Special Request Horns, who have become one of Holland’s most successful horn section over the past few years, with more than 30 concerts in the Amsterdam Ziggodome, serving a broad selection of international acclaimed artists with their custom tailored arrangements and solid performances.

Jan is currently member of the Jazz Orchestra of the Concertgebouw, New Rotterdam Jazz Orchestra, Candy Dulfer Band, and guest teacher at the Codarts conservatory in Rotterdam.