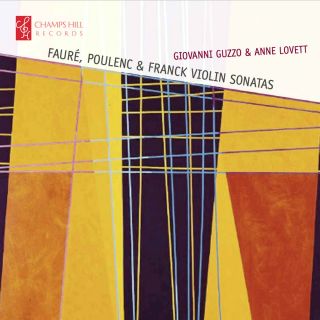 Catalog number: CHRCD 081
Releasedate: 01-04-16
- each of the sonatas of this album reflects the cultivation of a repertoire of French chamber music during a period marked by change and conflicts

Each of the sonatas on this recording arose naturally out of notions of national identity and pride. They also reflect the careful cultivation of a distinctive repertoire of French chamber music during a period marked by breakneck change and catastrophic conflicts. César Franck and Gabriel Fauré, both talented and influential teachers, played significant roles in nudging French chamber music out of the comfort of domestic parlours and privileged aristocratic salons into the mainstream of the international concert repertoire. The Belgian Franck and his Francophone followers absorbed important lessons from German music; Fauré and many fellow Gallic composers, meanwhile, sought to emulate in their work the refined tonal beauty, clarity and sophistication of contemporary French verse. The art of composition in France gained in depth and seriousness during the early decades of the Third Republic, in part in response to heavy French losses in the Franco-Prussian War of 1870–71, in part to advance the nation’s position in the escalating fin-de-siècle culture wars. While Poulenc openly mocked such high- minded gravité in the works of his precocious youth, in later years he confronted serious questions about life’s transience and paradoxes, not least those raised by the national humiliation that followed Nazi Germany’s conquest and partition of France in 1940.
Born in Venezuela to parents of Italian and Venezuelan heritage, young violinist Giovanni Guzzo is rapidly rising as one of the leading performers of his generation. He continues to captivate audiences around the world with his unique and passionate approach to his performances. Following his solo debut with the Royal Philharmonic Orchestra, critics described him as a wonderfully “magnetic” and “commanding” performer. Having started his musical studies with the piano at the age of five, and violin at the age of six under the tutelage of Emil Friedman and Luis Miguel Gonzales in Venezuela, he became the youngest violinist to win 1st prize at the XII National Violin Competition “Juan Bautista Plaza”, at only 12 years of age. Following this success, he relocated to Europe to become a protégé of the renowned French virtuoso violinist Maurice Hasson at the Royal Academy of Music in London, where he was granted a scholarship at the early age of 16 and from where he graduated with the highest honours. A keen recitalist and chamber musician, Giovanni has worked closely with some of today’s leading musicians such as Maxim Vengerov, Martha Argerich, Joshua Bell, Martin Fröst, Daniel Hope, Sir Colin Davis, Sir Peter Maxwell Davies, Gábor Takács- Nagy, the Maggini and Takacs quartets, Gerhard Schulz, Mats Lidström, to name but a few. His talent has been recognised with numerous awards including Her Majesty the Queen’s commendation for Excellence, Gold medal at the Marlow Music Festival 2006, HRH Princess Alice’s Prize, the PROMIS award given by the London.