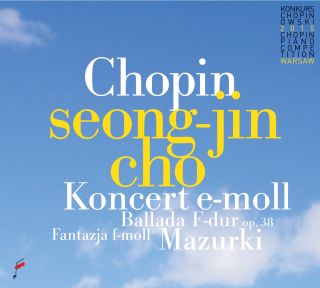 - the eagerly-awaited CD with recordings of superb interpretations by the 1st Prize winner and the laureate of the prize for best recording of a polonaise.

- aside from solo works, also to be found in the album is the final Concerto in E minor with the Warsaw Philharmonic Orchestra under the baton of Jacek Kaspszyk

- the CD contains recordings that were not included in the disc released directly after the Competition by Deutsche Grammophon!

When does an eventual competition winner emerge as the leading contender from a pack of around 80 contestants? Seong-Jin Cho arrived at the 17th International Fryderyk Piano Competition with something of a prizewinning streak, since he had already enjoyed success at both the Rubinstein and Tchaikovsky Competitions in 2014 and 2011 respectively. Although his was not the first name on everyone’s lips during the long and tense wait for the final results, few were surprised when the announcement was made and he became South Korea’s first gold medalist in the history of the competition. His playing throughout each stage had been unfailingly cultivated, his sound always beautifully focused and poised.
These qualities had indeed singled him out for attention right from the beginning of the competition. Reporting on one of the First Stage sessions for the Chopin Courier, Andrzej Sulek noted that ‘Seong-Jin Cho brought a clear jump in quality relative to those before him: he revealed himself to be a refined, intelligent pianist’. He also made a comparison with one of the greatest of all Warsaw winners when he singled out a short piece for special comment: ‘The Etude in C major from Op. 10 was worthy of the model created by Pollini’. By the start of the Third Stage, Sulek was still able to claim that ‘the best impression was made by Cho. This is a monolithic personality, a proper pianist, in perfect control of the instrument, almost flawlessly precise’.
This recording traces the pianist through all stages of the competition.
He captured unequivocally the brilliance of the Concerto in E minor, Op. 11, a work that dazzles with the youthful spirit of a composer who completed it in August 1830, just three months before his departure from Warsaw. From the moment of piano’s entry with fortissimo octaves, attention is focused on the soloist, and Cho proved that he deserved that limelight.
Born in 1994, in Seoul, he is a student of Michel Beroff at the Paris Conservatoire. Winner of the 17th International Fryderyk Chopin Piano Competition in Warsaw (2015) and the Fryderyk Chopin Society Prize for the best performance of a Polonaise. He has also won the Moscow International Chopin Competition (2008) and a piano competition in Hamamatsu, Japan (2009), as well as Third Prize in the Pyotr Tchaikovsky Competition in Russia (2011) and the Arthur Rubinstein in Tel Aviv (2014). He has performed in concert with the Mariinsky Theatre Symphony Orchestra (cond. Valery Gergiev), the French Radio, Czech, Seoul (all with Myung-Whun Chung), Munich (cond. Lorin Maazel) and Ural (cond. Dmitry Liss) philharmonic orchestras, Berlin Radio Orchestra (cond. Marek Janowski), Russian National Orchestra (cond. Mikhail Pletnev) and Basel Symphony Orchestra (cond. Pletnev). He has toured Japan, Germany, France, Russia, Poland, Israel, China and the US. He has appeared at the Tokyo Opera, in Osaka, at the Moscow Conservatory and at the Mariinsky Theatre in St Petersburg, including with recitals. He has participated in numerous European festivals, including in St Petersburg, Moscow, Duszniki-Zdrój and Cracow, as well as festivals in New York and Castleton. As a chamber musician, he has been invited to work with the outstanding violinist Kyung Wha Chung.