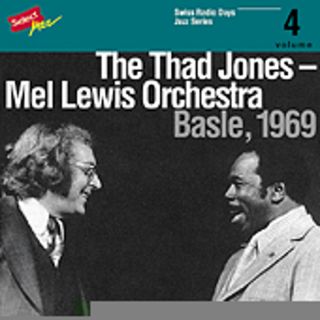 Catalog number: TCB 02042
Releasedate: 10-02-09
N.a.
This live concert, broadcast over Swiss radio and released for the first time on this 1995 CD, features the Thad Jones/Mel Lewis Orchestra at its prime. The remarkable all-star group includes two first trumpeters (Snooky Young and Al Porcino) and such soloists as trumpeters Richard Williams, Danny Moore and Thad Jones, trombonist Jimmy Knepper, Jerome Richardsonon soprano, Jerry Dodgion on flute and alto, baritonist Pepper Adams, pianist Roland Hanna, bassist Richard Davis and tenor great Joe Henderson whose short stint with the band was long enough to include this European tour. Highlights of the superior set include "Second Race," "The Waltz You Swang For Me," "Don't Get Sassy" and "Groove Merchant." Highly recommended to fans of the band, this Swiss CD can be found with a bit of a search.
The Thad Jones/Mel Lewis Jazz Orchestra was a jazz big band formed by trumpeter Thad Jones and drummer Mel Lewisaround 1965. The band performed for twelve years in its original incarnation, and included a 1972 tour of the Soviet Unionduring the height of the Cold War. The band won a 1978 Grammy Award for the album Live in Munich and in 2009 a Grammy Award for the album Monday Night Live at the Village Vanguard. The collaboration ended in 1978 with Jones suddenly moving to Copenhagen, Denmark, after which the band became the Mel Lewis Jazz Orchestra. Since the death of Lewis in 1990 it has been known as the Vanguard Jazz Orchestra. They have maintained a Monday-night residency at the Village Vanguard for five decades.