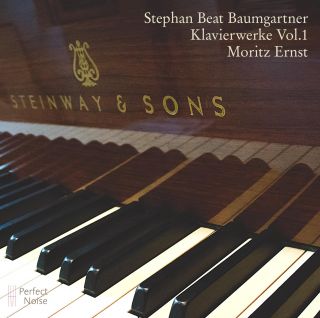 - luckily Moritz Ernst played for the recording. He is a international known spezialist for modern music

Stephan B. Baumgartner was born on 1946. His ”oeuvre” as composer contains solos for single instruments, a large field of chamber music, where the assimilation of string and woodwind instruments is fostered, songs, piano pieces, orchestral and symphonic works. ”At my concerts I am often asked to speak about my music: That is a real problem for me, first I am a composer not a writer. You are going to hear my music, please close your eyes and open your heart. Not my thoughts and whatever went through my mind during the creative process is important, what is moving in your soul is essential. If there is an echo, my aim is fulfilled. Music has to be conceived by the heart and not intellectually. Therefore I do not intend music to have to do with intellect. But if you analyse art only by brain, the harvest is poor, unknown and uncountles spheres will be hidden. I am very thankful for the opportunity to arouse and participate in the intense richness of the European culture. I am convinced, that the extended tonality never will be exhausted.”

Moritz Ernst was born in 1986 in Ostwestfalen, Germany and began playing the piano already at the age of five, taking lessons in Detmold. After graduating from high school at the early age of 16, he continued his piano studies in 2002 at the Detmolder Musikhochschule where he also studied musicology. During that time he was also awarded several prizes. In 2003 he became a private student of the well known professor for piano, Peter Feuchtwanger. Shortly thereafter his concert activities were launched with regular performances in Europe and abroad: (In Germany Musikhalle Hamburg; Austria – Mozarteum Salzburg; England – Purcell Room London, Switzerland and Italy.) Some years later Moritz Ernst continued his piano studies with Prof JeanJacques Dünki and harpsichord with Prof Jörg Andreas Bötticher at the Schola Cantorum in Basel, Switzerland, thereafter his career also as harpsichordist began. During these years of study, he attended master classes and workshops held by Günter Reinhold, Paul BaduraSkoda, Ferderick Rzewski and the Auryn Quartet.
Moritz Ernst is presently concertising as pianist, harpsichordist and chamber musician performing a wide range of repertoire from baroque to contemporary music. Concerts include appearences in Germany, at the Piano Festival Feuchtwangen, the Lake Constance Festival, the Beethoven Festival Bonn; in England, France, Italy, Austria, Sweden, Romania, Belgium, Netherlands, Luxembourg, Switzerland and Russia. (St. Petersburg SoundWays Festival)

He has also held master classes at the Musikhochschule in Stuttgart, Germany and at The Royal Music Academy in Malmö, Sweden. Music of the 20th and 21st century is especially dear to his heart. Ernst has premiered several works as well as colaborating closely with composers such as Eötvös, Pelzel,Winkler, Pflüger,Wohlhauser, Olofsson, Maros and Pröve, some of whom have dedicated works to him. In addition, he advocates the forgotten and less played composers; for example by performing Johann Nepomuk Hummel’s Sonata op. 106, Feruccio Busonni‘s Fantasia contrappuntistica and the music of Samuel Scheidt, as well as music for the 16th tone piano. (Micro tonality)

The international press has highly acclaimed Moritz Ernst for his superb recording of music by Sir Malchom Arnold. “The Classical Music Magazine” granted him their highest rating. “Gramophone” praised his sparkling and stimulating rendition of this recording. In addition, he has performed for international radio stations such as DRS2 (Zurich), Radio Luxembourg, SR (Radio of the Saarland), DeutschlandRadio Kultur, Deutschlandfunk and BBC London.

Extensive plans for future recording projects include: the harpsichord works of Kent Olofsson, the complete piano works of Viktor Ullmann, the sonatas by Norbert von Hannenheim in connection with Deutschlandradio (German Radio) and the CD label EDA Records on two CDs as well as works by Bernfried Pröve (on 7 CDs). In 2014 the Piano Concerto by Victor Ullmann will be recorded together with the Dortmund Philharmonic. In June 2013 Moritz Ernst gave his debut performance with the Symphony Orchestra of Bern (Switzerland) under the baton Mario Venzago with a performance of the 2nd Piano Concerto by Edward Stämpfli.

In 2014, his highly acclaimed Asian debut took place.There he also held mastercalsses and lectures at the SEGI College of Malaysia, the University of Malaysia and the Shanghai Conservatory of Music. Moritz Ernst’s curiosity to discover new facets in music and music history has led him to cooperate with musicians such as singer Eva Csapo, the violinists Egidius Streiff and Hans Heinz Schneeberger and the clarinetist Urs Brügger.