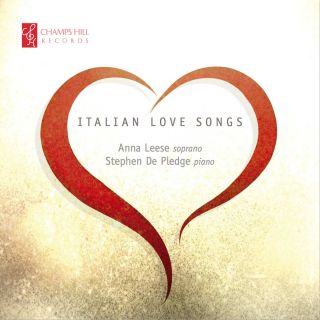 Catalog number: CHRCD 050
Releasedate: 28-01-13
N.A.
Anna Leese and Stephen de Pledge perform Italian Love Songs by Bellini, Puccini, Donizetti and Tosti. These elegant pieces for solo voice, some well known, others less so, connect directly with a rich and substantial body of Italian art songs, romanze and liriche da camera, composed over the course of the nineteenth and early twentieth centuries.
New Zealand Soprano Anna Leese is a graduate of the University of Otago, the Royal College of Music and the Benjamin Britten International Opera School. Her many awards include the 2005 Richard Tauber Prize. Recent concert engagements have included Mahler’s second symphony with Bernard Haitink, Vaughan Williams’s Sea Symphony with the Malaysian Philharmonic, Beethoven’s Symphony No. 9 in Madrid with Carlo Rizzi, and Elijah with the BBC National Orchestra of Wales, conducted by Thierry Fischer. She made her debut at the 2006 BBC Proms with the Scottish Chamber Orchestra and Sir Roger Norrington, and has appeared in a number of opera gala concerts with José Carreras. Her recordings include a debut recital disc for EMI with Graham Johnson, and a Haydn disc on the Michael Storrs Music label. Anna Leese made her Covent Garden debut as Tamiri (Il re pastore), returning for Musetta (La bohème), Micaela (Carmen), First Lady (Die Zauberflöte) and Echo (Ariadne). For the New Zealand Opera she has sung Ilia in Mozart’s Idomeneo, Cleopatra in Giulio Cesare and Tatyana in Eugene Onegin. She has sung Biancofiore in Francesca da Rimini and Suzel in L’amico Fritz for Opera Holland Park, Antonia in Hoffmann for the Cologne Opera and Tatyana for the Flanders Opera, and she made her North American debut with the Canadian Opera Company as Musetta. Anna Leese is an Associate Artist of the Classical Opera Company. Other engagements include Leila in Pearlfishers for Opera Holland Park, Majenka (The Bartered Bride) and Donna Elvira (Don Giovanni) for the New Zealand Opera, and concerts with the Auckland Philharmonic Orchestra and City of Birmingham Symphony Orchestra.