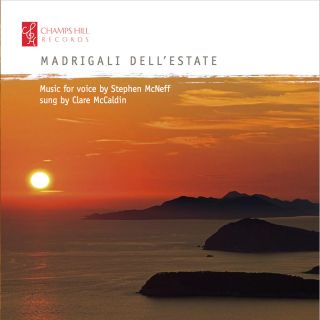 Catalog number: CHRCD 053
Releasedate: 29-01-16
N.a.
This new release of world premiere recordings is the result of composer Stephen McNeff and mezzo-soprano Clare McCaldin's shared interest in the Italian poet Gabriele d'Annunzio, born in Abruzzo, 150 years ago this year. A controversial figure, he was one of Italy's bad boys; lover of actress Eleonora Duse, a collaborator with Debussy and librettist for Mascagni and sometime rival of Mussolini (who very probably tried to have him assassinated).

Clare initially asked Stephen for songs to premiere at a Royal Opera House recital and he set short extracts from d'Annunzio's poems Undulna and Psiche Giacente, which he called collectively Farfalle di Neve and this Italian poetry was something Stephen found both natural and strangely exotic to set to music.

The poems of Madrigali dell'Estate, which form a more substantial song-cycle, again commissioned for a recital at the Royal Opera House, trace the end of summer slowly giving way to autumn and are located geographically in a specific area near the mouth of the Motrone river in Abruzzo - a region that Stephen has come to know and love - which at first sight seemed like an untouristic Tuscany with its hill towns and mountains. Abruzzo is actually rather more rugged, some parts almost deserted.

Encouraged by the success of these settings, Stephen and Clare again worked together to extend the theme, this time in English, for a commission for the Presteigne Festival. A Voice of One Delight retells the events surrounding Shelley's death,along with his friend Williams,in the bay of La Spezia on 8 July 1822. Louis Edouard Fournier's highly romanticised painting The Funeral of Shelley (1889) provided the original inspiration and the presence of female onlookers in the background suggested that the story might be told from a woman's point of view.

To round-off the Italian cycle Stephen returned to Abruzzo to write some new settings of traditional folk songs in dialect with the help of a friend and her grandmother, who he describes as embodying "both the humour and fortitude of the people in the hill towns".
Clare McCaldin read Modern Languages at Clare College, Cambridge and initially had a career in advertising before turning to singing. Since then she has appeared as a soloist all over the UK and in Europe, on-stage and in concert. In addition to her reputation presenting established repertoire, Clare is recognised for her advocacy of new work.

Stephen McNeff studied composition at The Royal Academy of Music and initially established a reputation as a theatre composer. In 2004 the success of his opera for young people Clockwork, based on Philip Pullman's book, and staged at the Linbury Theatre, Royal Opera House, widened his reputation, as did his appointment the following year as the Bournemouth Symphony Orchestra's "Composer-in-the-House".

Clare read Modern Languages at Clare College, Cambridge and initially had a career in advertising before turning to singing. Since then she has appeared as a soloist all over the UK and in Europe, on-stage and in concert. In addition to her reputation presenting established repertoire,
Clare is recognised for her advocacy of new work. She has premiered music by Hugh Wood, Cheryl Frances-Hoad, Cecilia McDowell, Brian Irvine, Alexander l’Estrange and Rachel Stott, and created roles and scenes for Errollyn Wallen (Opera North and Royal Opera), Stephen McNeff (WNO) and Luke Styles and Sasha Siem at Aldeburgh. She has an extensive discography and recently recorded Miss Tina in Michael Hurd’s The Aspern Papers (Ulster Orchestra/Vass). Her interest in exploring non-traditional ways to present vocal works led to Clare’s collaboration with director Joe Austin to create a staged version of A Voice Of One Delight in a piano version, for Tête à Tête: the Opera Festival.