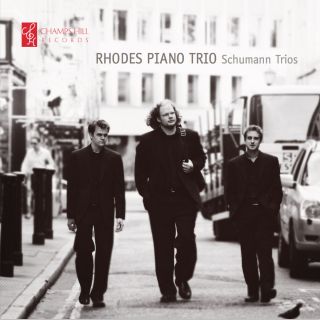 Catalog number: CHRCD 052
Releasedate: 25-02-13
Viewed from the ground, the big musical events of 1847 must have been Meyerbeer’s grand operas: the command performance of Vielka for the Emperor Ferdinand, or the frenzied response to Robert le diable with Jenny Lind in London. In fact, there were a handful of small-scale masterpieces created that year which have proved more enduring, and they include Schumann’s first two piano trios, those composed by his wife Clara and Fanny Mendelssohn, and the exquisite cello sonata of Frederic Chopin.

Though dismissed by some historians as a ‘dry’ year for Schumann, who ‘interrupted’ his more important work on his opera Genoveva to write these two piano trios, it was anything but – and the chamber works were ultimately more successful and significant than the flawed opera. Schumann may have been prompted to turn to the form by his wife’s success: in January, Clara performed in the premiere of her own Piano Trio in G minor Op. 17 in Vienna; then in April, Fanny Mendelssohn Piano Trio in D minor was premiered in Berlin. Schumann began work on his own Piano Trio in this key the following month: Op.63. In his mind must surely also have been Felix Mendelssohn’s D minor trio of 1840, which Schumann had declared ‘the master trio of the age’. Certainly, his turbulent, tightly knit utterance, which seems to plunge in medias res, shares a sense of tragic restlessness with Mendelssohn’s tempestuous work. Grief overshadowed that year: the Schumanns’ dear friend Fanny Mendelssohn died of a stroke in May; the following month their fourth child Emil died at just 16 months.

By November, Robert would be a pall-bearer for Mendelssohn himself. A desperate, yearning melancholy hangs over the first trio, despite its masterful use of contrasts and optimistic ending. The first movement – marked ‘with energy and passion’ – begins with an inimitably surging melody, initiated by low violin, closely followed by the cello in a seamless wave that feels as if it could be endlessly extended, perhaps partly due to its irregular seven-bar structure. This seething lyricism is broken by martial, dotted figures which will play a key transition role throughout, and flowers into a sweetly yearning, syncopated second subject. Most remarkable in this movement is the otherworldly hymn-like tune that arrives after the exposition. Over pianissimo piano triplets, the strings, playing on the bridge with a dry, eery timbre, set forth a melody of startling innocence and tenderness. Though cleverly wound back to the first subject, it makes one further reappearance – like an ethereal visitation – in the coda. With its symphonic sweep and brilliant counterpoint, this is one of Schumann’s great inspirations. No wonder Clara wrote: ‘The first movement is one of the most beautiful that I know,’ when they first performed it on her birthday in September. The Scherzo explodes into life with an accented dominant chord in F major, and combines two utterly contrasting musical motifs: a romping, dotted rhythm that breaks into winding, legato waves. This second motif is transformed into the chromatic scales of the subdued Trio, where all three instruments follow each other in close canon. Throughout this and his second trio, there is much evidence of the intense work he and Clara had done on counterpoint two years earlier, which resulted in the exquisite Canonic Studies for Pedal Piano, Op. 58 and the six organ fugues on B-A-C-H. The composer commented: ‘I find it strange and remarkable that nearly every motif that forms in my mind lends itself to contrapuntal treatment. It is not that I start with the slightest intention of composing such themes. It just happens that way. There seems to be something basic and natural about it.’ This is true also of the funereal slow movement, marked ‘with an inward feeling’. The lone violin reaches out across the piano’s dark suspensions with aching, hesitant gestures. It belonged to a ‘time of gloomy moods’ according to the composer, though the second theme in F major has a melting elegance and an aspiring character. It gradually returns to shadowy uncertainty, and moves with tortured steps towards silence and stillness, the piano’s last arpeggios hanging in the air before plunging into the ebullient stream of the D major finale. Marked ‘with fire’, this movement comes like a consolatory blessing on this melancholic work. Its sweeping opening melody is punctuated by driving triplets. A dynamic development dips back into the minor with ardent string vocalises, before leading back to a triumphant conclusion. Schumann began working on the second Trio Op.80 before he had completed the first, and in her diary Clara noted: ‘I love it passionately and keep on wanting to play it!’ In the key of F major it certainly makes a dramatic contrast to the first, lit with high spirits and a breezy spaciousness. Schumann himself commented that ‘it makes a friendlier and more immediate impression’. The harmony of the opening, moving as it does from a tonic chord to sit on the fourth chord of the scale, B flat, lends a wonderful sense of groundedness and confidence. The first subject takes off with brisk semi-quavers and an optimistic upward drive. After a gentle second theme, cleverly formed from a rhythmic variant of the main tune, the violin introduces a sighing vocalise, in fact a quote from the lied ‘Dein Bildnis wunderselig’ from his Eichendorff Liederkreis Op. 39. It emerges seamlessly from this movement’s material and provides a calm interlude before the intricate development section, with its tightly wrought, three-way counterpoint. Of such passages, Schumann had written that ‘the best fugue will always be the one that the public takes – for a Strauss waltz; in other words, where the artistic roots are covered as are those of a flower, so that we only perceive the blossom’. Nothing could be truer of his use of counterpoint in the rapt slow movement. Bass lines edge up chromatically beneath a poignant descending violin melody, creating almost a mirror image of compelling tension. This long, song-like subject obliquely recalls the lied theme of the first movement, and is condensed and transformed into the remote key of A major for the start of a series of delicate Baroque-like variations. The elusive third movement, in B flat minor and marked ‘with great movement’, acts more like a Mendelssohnian intermezzo than a traditional menuet or scherzo. With its tripping, elliptical rhythm, the tune suspended over the bar line, it has the introspective quality of a dancer alone lost in thought. The fragmentary, echoing falling phrases turn around and rise upwards in a more flowing middle section. The coda brilliantly binds the two together. A robust finale begins in D minor and finds its way to a triumphant F major via a tortuous journey of multiple keys, complex fugato sections and a succession of dizzying transformations of its initial subject. This consists of three elements: a sweeping legato phrase on the piano, a brisk staccato response on the cello, and an assertive, tumbling violin melody that reasserts itself to form the secondary theme, and is reiterated again and again in the coda, bringing the work to its exhilarating close.

Though less known and performed than the trios of contemporaries Mendelssohn and Brahms, the piano trios of Robert Schumann are skillful, attractive, and sincere mature works. Schumann wielded the elements of haunting grief and breezy fun with equal dexterity; a rare gift that the marvelous Rhodes Piano Trio masterfully displays.
Michael Gurevich violin David Edmonds cello Robert Thompson piano. Formed in 2003 at the Royal Northern College of Music under the guidance of the
late Dr. Christopher Rowland and Alasdair Tait, the Rhodes Piano Trio won Second Prize at the 2011 Melbourne International Chamber Music Competition. Selected for representation by YCAT in 2010, the Trio has performed widely at venues and festivals across the UK and abroad, giving recitals at the Wigmore Hall, Barbican, Purcell Room, Bridgewater Hall, Melbourne Recital Centre, and the Edinburgh Fringe, the Aldeburgh, Verbier, Aix-en-Provence, Cordes sur Ciel, Festspiele-Mecklenburg Vorpommern and Schwetzingen festivals. They have appeared on BBC Radio 3, SWR2 in Germany and ABC Classic FM in Australia. During the 2011/12 season the Trio was the resident ensemble as part of the One to Watch series at Yong Siew Toh Conservatory of Music in Singapore, and they were Chamber Music Fellows at the Guildhall School of Music & Drama. The Trio have regularly worked at the Britten-Pears Young Artist Programme in Aldeburgh, taking part in masterclasses with the Florestan Trio, the Ulysses Ensemble, Menahem Pressler and Mitsuko Uchida. They also worked with András Keller and Ferenc Rados at IMS Prussia Cove, the Aix-en-Provence and Verbier academies.
Whilst at the RNCM, the Trio enjoyed great success, winning all the RNCM’s major chamber music prizes, touring Scotland as Tunnell Trust Award winners twice and winning the 2008 Elias Fawcett Award in the Royal Over-Seas League Ensemble Finals. From 2005–2009 they took part in the RNCM’s ChamberFests, in 2006 performing the Boris Tchaikovsky Trio to critical acclaim. They studied extensively with the Endellion String Quartet, the Gould Piano Trio and Ian Brown as well as taking classes with Charles Rosen, Alexander Melnikov and Gábor Takács-Nagy.

Robert Thompson (piano) studied with Carole Presland at the Royal Northern College of Music and went on to complete his solo studies with Peter Frankl at Yale University. Since then Robert has enjoyed great success as a recitalist and chamber musician collaborating with artists such as Philip Higham, Thomas Gould, Bartosz Woroch and the Heath Quartet. Robert is also Head of Piano at Bedford School. Michael Gurevich (violin) is a member of the London Haydn Quartet, with whom he appears worldwide in venues such as Carnegie Hall, Wigmore Hall and Esterhaza Palace, and has recorded with them on the Hyperion label. He has been a guest leader with several orchestras including the Glyndebourne Orchestra and Manchester Camerata. He also has a violin class at Chetham's School of Music and has taught chamber music at, amongst others, the Juilliard School, Royal Academy of Music and Yale University. Following a position on the Royal Concertgebouw Orchestra Academy and studies with esteemed cellist Gregor Horsch, David Edmonds (cello) has been in high demand as chamber musician and orchestral player with some of the finest ensembles and orchestras in the UK. David has performed solo in venues such as the Royal Concertgebouw Kleine Zaal and has collaborated with musicians such as Marcia Crayford, Bjarne Fiskum and the Benyounes Quartet. Passionate about teaching, he has been working with the National Youth Orchestra of Iraq since its inception.
...thrilling, edge-of-your-seat playing, delivered with real sincerity, and best of all, the three performers actually seemed to be enjoying themselves.
The Strad / ROSL Edinburgh Fringe Festival / November 2011. A performance of suave brilliance by the Rhodes Trio, a fine ensemble, of whom one needs to hear more. The Guardian / RNCM ChamberFest/Boris Tchaikovsky Trio / January 2006