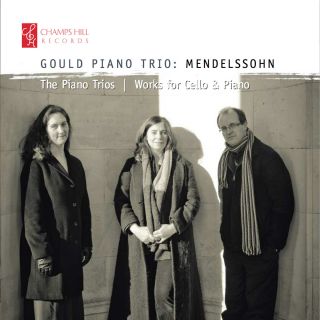 Catalog number: CHRCD 088
Releasedate: 29-01-16
N.a.
Champs Hill Records adds to its Mendelssohn discography with this new release from the acclaimed Gould Piano Trio. The Trio's Mendelssohn pedigree is extremely fine. From studies in Banff with the great pianist Menahem Pressler, through many performances, and a previous trios recording, they bring the perspective of a longer acquaintance with this wonderful music. The Washington Post recently compared the Trio to the Beaux Arts Trio, noting their 'musical fire' and dedication to the genre.
Lucy Gould founded the Gould Piano Trio in 1992 whilst studying at the Royal Academy of Music. Alongside her work with the trio she is also a member of the Chamber Orchestra of Europe and much in demand as a guest leader of many leading orchestras in the UK. She has made concerto appearances with the BBC National Orchestra of Wales, the Bournemouth Sinfonietta and the English String Orchestra. As a much sought-after chamber musician, Lucy has collaborated with many artists, including Roger Vignoles and Leon McCawley. Her recordings include John Ireland’s Violin Sonatas with Benjamin Frith for Naxos (BBC Music Magazine Chamber Music Choice), the premiere performance of violin works by Stanford for Naxos and the Mendelssohn Octet with Daniel Hope and colleagues from the Chamber Orchestra of Europe (Deutsche Grammophon). A CD of chamber music by Bax, including the premiere recording of the Trio for clarinet, violin and piano was shortlisted for a Gramophone Award. Lucy has three children and lives in Cardiff, holding a teaching post at the Royal Welsh College of Music and Drama. Alice Neary was the winner of the 1998 Pierre Fournier Award, and won major prizes in 2001 Leonard Rose Competition, USA and the 1997 Adam International Cello Competition, New Zealand. Alice’s performances have included concertos with the Ulster Orchestra, Scottish Chamber Orchestra, Royal Liverpool Philharmonic and Israel Symphony and recitals at the Wigmore Hall, Purcell Room and Bridgewater Hall. Festival appearances include Santa Fe, Bath and City of London. She has broadcast extensively on BBC Radio 3 and NPR (USA) and recordings include the Tovey Cello concerto with the Ulster Orchestra, Ireland cello sonata and Paul Patterson cello concerto. A passionate chamber musician, Alice joined the Gould Piano Trio in 2001 and has appeared as guest cellist with Nash Ensemble, Endellion and Elias string quartets. Alice studied with Ralph Kirshbaum at the Royal Northern College of Music and with Timothy Eddy, as a Fulbright scholar in USA. She teaches at the Royal College of Music and Royal Welsh College of Music and Drama. She plays an Alessandro Gagliano cello of 1710. Benjamin Frith sought the guidance of Fanny Waterman and went on to win awards culminating in the Artur Rubinstein Piano Masters Gold Medal. Subsequently he has enjoyed a varied career, playing concertos with such orchestras as the Halle and Warsaw Philharmonic, recitals at major festivals and coaching mainly at the RNCM. In recent years he has devoted much of his time to the chamber repertoire, principally as pianist in the Gould Piano Trio. Throughout the latter half of his career he has had the good fortune to record much of the early romantic solo piano music (for Naxos) and a good deal of the late Classical and Romantic trio literature. His Davidsbundler Op.6 of Schumann was chosen as top recommendation by Radio 3. Other releases include Moeran’s 3rd Rhapsody with the Ulster Orchestra and the second concerto of C.V. Stanford with BBC National Orchestra of Wales. He takes a particular pleasure in exploring the work of the late romantic British composers.