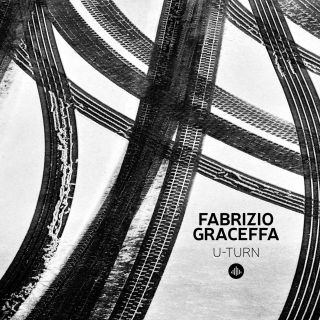 - like a musical road movie the music fits excellent while travelling!

On 'U-Turn', Fabrizio Graceffa is reunited with is longtime quartet featuring drummer Teun Verbruggen, bass player Boris Schmidt and trumpet player Jean Paul Estiévenart. The quartet is extended with first class musicians Nicolas Kummert (sax) and the young French trombonist Edouard Wallyn.
U-Turn is the second album by Belgium / Italian guitarist Fabrizio Graceffa. As on his previous album ‘Stories’ the influence of his musical heroes like Pat Metheny, John Scofield, Bill Frisell but also Jimi Hendrix and B.B King is clearly present. It is eclectic roadtrip through American and European jazz, folk, country, rock and even some classical elements. Like a musical road movie the music fits excellent while travelling!
Born in 1979 in Belgium, Fabrizio Graceffa started the guitar at 13. At 17, he plays with many rock and blues bands. Two years later he discovered jazz music.

At 19, he tooked some private lessons with guitar players Marco Locurcio and Paolo Loveri.
In 1999, he attends some workshops with some jazz player like Pierre Van Dormael, Erwin Vann, Peter Hertmans, Jaques Pirotton, Mike Manieri… One year later he founded his first band as a leader “7ième Set”.

The same year he attends the Brussels Music Academy and tooked lessons with drummer Bruno Castellucci and the guitar player Paolo Loveri.
Then he joined the Luxembourg’s Conservatory and three years later he was graduated with a first prize in Jazz Guitar and Composition.
In 2004, he formed the Fabrizio Graceffa Quartet with drummer Herman Pardon, Boris Schmidt as bass player and the german trumpet player Peer Baierlein.

In 2010, he recorded his first album “Stories” with Belgian Label Mogno Music.

In 2011, he produced and recorded an EP with a rock band called Bes.

In 2014, he founded an extension of his quartet “The Fabrizio Graceffa Band” with some of the best Belgian and French jazz musicians like Jean Paul Estiévenart (Perico Sambeat), Teun Verbruggen (Jeff Neve, FES, Toots Thielemans) Nicolas Kummert (Pierre Van Dormael, Lionel Loueke, Nic Thys...) Boris Schmidt (Quentin Dujardin), Jacques Pili and Edwouard Wallyn.
The band has played as resident band in one of the main jazzclubs in Brussels The "Sounds" during two years and invited some of great others musicians like Toine Thys and Reggie Washington and Erwin Vann.

“For jazz cats, this is a chance to hear how the group has developed. And the broad spectrum of music might well be the beginning of a beautiful love story with jazz for other listeners”. Georges Tonla Briquet (Agenda).