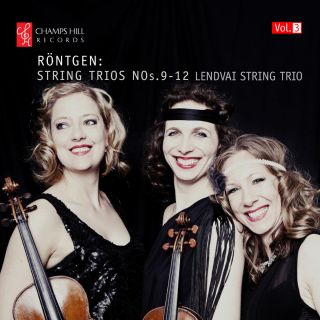 - some recorded works are unpublished

The Lendvai String Trio release the third disc in a series of the complete String Trios by Dutch composer Julius Röntgen (1855-1932).

The trio’s journey began in 2007 when they stumbled across Röntgen’s first string trio (the only one published to date), and soon after discovered that there are fifteen more, carefully stored in handwritten manuscript form in the Netherlands Music Institute in the Hague.

A major award - The Kersjes Prize - and support from Champs Hill Records has enabled this project to be realised.

A unique feature of these works is its numerous references to traditional Dutch tunes and dances. Roentgen’s interest in folk music was largely due to his friendship with Edvard Grieg, with whom he traveled through Norway in search of Norwegian folk songs. For Röntgen it became important to do the same for the traditional music of Holland, and he considered the dissemination and popularization of his national music as one of his most important tasks.

The Lendvai Trio are Dutch violinist Nadia Wijzenbeek, Swedish violist Ylvali Zilliacus and British cellist Marie Macleod. Since their Wigmore Hall debut in 2006, the Lendvai String Trio has had a busy schedule of concerts at major venues throughout Europe, including several re-invitations to Wigmore Hall, recitals at King’s Place, the Barbican and Purcell Room in London, the Concertgebouw in Amsterdam and Musikaliska in Stockholm.

“... there’s an order of mastery casually involved here that’s quite out of the ordinary.” International Record Review

“The Lendvai Trio’s enthusiasm for these works compels attention, and one can hear the broad grins on their faces as they played...” Gramophone

Since their Wigmore Hall debut in 2006, the Lendvai String Trio has had a busy schedule of concerts at major venues throughout Europe, including several re- invitations to Wigmore Hall, recitals at Kings Place, the Barbican and Purcell Room in London, the Concertgebouw in Amsterdam and Musikaliska in Stockholm.
In 2011 the trio was awarded the prestigious Kersjes Prize in Holland, as well as being selected for the Concertgebouw’s Young Artist Series in Amsterdam; other previous successes include winning awards from the Kirckman Concert Society, the Worshipful Company of Musicians, Musician’s Benevolent Fund, the Park Lane Group, and the Concert Promoters Network in the UK. In 2005 they were selected for the Holland Music Sessions ‘New Masters on Tour’, resulting in a series of concerts across Romania, Bulgaria, Latvia, Lithuania, Poland and the Netherlands. The trio regularly perform at festivals in the UK, Germany, Italy, France, Switzerland, Austria and Sweden and their concerts have been broadcast by Dutch Radio 4, Swedish Radio P2 and BBC Radio 3. Their debut CD Destination Paris (2011, Stone Records) received international acclaim as well as their recent recording of the complete Beethoven String Trios (Stone Records) which was BBC Music Magazine’s Chamber Choice in June 2013.
The trio enjoys regular collaborations with other artists and recent highlights have included concerts with oboists Alexei Ogrintchouk and Nicholas Daniel, and pianists Paolo Giacometti, Charles Owen, Alasdair Beatson and Martin Sturfält. As well as regularly commissioning new works, the Lendvai String Trio are also keen to uncover and revive ‘forgotten’ and lesser-known works for the genre.