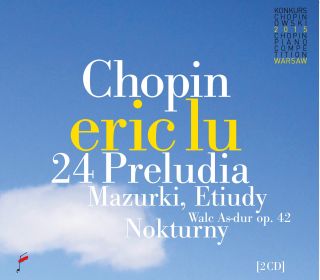 Catalog number: NIFCCD 621
Releasedate: 10-06-16
- Eric Lu was placed fourth of the International Fryderyk Chopin Piano Competition 2015  at the age of still only 17

- the Boston-born pianist had already achieved success earlier in 2015 by winning first prize in the National Chopin Competition of the US in Miami, and he stood out early on in Warsaw, playing on a Yamaha with consistently warm results

In the annals of the International Fryderyk Chopin Piano Competition, 2015 will go down not only as the year of the North Americans but of the young contestants. Coming in ahead of Canada’s Tony Yike Yang, whose fifth prize made him the youngest-ever laureate in the history of the competition, Eric Lu was placed fourth at the age of still only 17. The Boston-born pianist had already achieved success earlier in 2015 by winning first prize in the National Chopin Competition of the US in Miami, and he stood out early on in Warsaw, playing on a Yamaha with consistently warm results. Writing in the Chopin Courier, Dorota Szwarcman was quick to spot Lu when he played on the first Sunday afternoon: ‘The best, however, was Eric Lu… His maturity, especially in the Ballade in F minor, was a surprise, especially as he is only [17] years old.’ As required in the First Stage, Lu played a Nocturne and chose Op. 27 No. 2 in D flat. All the formal characteristics of this Chopin genre are distilledinto the two Op. 27 Nocturnes (1833–1836), in particular the floating melody of this D flat work—a jewel of Chopinesque craftsmanship. The musicologist Jim Sampson has (in The Music of Chopin) described his use of ornamental melody here as ‘exquisite, if sweet-toothed’, but goes on to analyse in detail how such a typical Chopin melody functions, even tracing some of its roots back to the ‘galant’ style and Mozart.
Eric Lu

Born in December 1997. Regarded as one of the finest pianists of the younger generation. He began learning piano at the age of six with Dorothy Shi,
before training at the New England Conservatory Preparatory School with Alexander Korsantia and A. Ramón Rivera. Since 2013, he has been a student of Jonathan Biss and Robert McDonald at the Curtis Institute of Music in Philadelphia. He is also a student of Dang Thai Son. He has won prizes in international piano competitions, such as the 17th International Fryderyk Chopin Piano Competition (October 2015, Fourth Prize), the National Chopin Piano Competition of the US in Miami (2015, First Prize), Moscow International Chopin Competition for Young Pianists (2014, First Prize), the Minnesota International e-Piano Junior Competition (2013, First Prize and the special Schubert prize) and the Ettlingen International Competition (2010, First Prize). He has performed in the US, Germany, Italy and China. He has worked with the Minnesota Orchestra, State Youth Orchestra of Armenia, Wellesley Symphony, Longwood Symphony and Boston Civic Symphony. He is a great admirer of the playing of Grigory Sokolov, whom he considers to be one of the greatest pianists of all time.