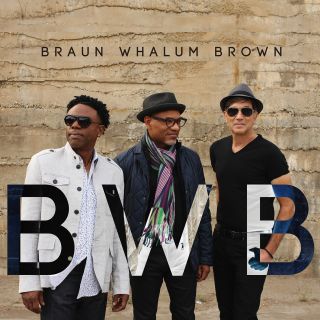 - the ten-track set struts and seduces with swagger and sophistication along with a mischievous dash of “sweet, tart and tasty”

A “Triple Dare” worth taking: superstar trio BWB returns with their third album, an entirely original collection handcrafted by Norman Brown (guitar-vocals), Kirk Whalum (saxophone-flute-vocals) and Rick Braun (trumpet-flugelhorn-valve trombone-vocals) combining only the gritty and greasiest elements of Kansas City jazz, Memphis soul and Philly funk. The self-titled, ten-track set struts and seduces with swagger and sophistication along with a mischievous dash of “sweet, tart and tasty” guaranteed to make you “Turn Up” and “Bust A Move.”

Norman Brown:
GRAMMY® Award winner Norman Brown is on close intimate terms with his audience. For almost two decades, it has been an engaging, mutually rewarding relationship, with the multitalented guitarist, composer and singer offering tasty sonic tidbits of classic R&B and contemporary jazz and his fans melting into satisfied aural bliss with every succulent, jazz inflected note. It‟s a veritable “love fest” – and Brown keeps the good vibes going on his long- awaited new release, Sending My Love, arriving this June on Peak Records. “I‟m a loving guy -- I hear that a lot. I started reading my emails and the fans were sending me so much love that I wanted to send them love back,” explains the artist, who wrote nine of the ten tunes on this offering. “The CD is about pure love, love in all its many aspects: a personal relationship and a general love for the planet and for people. We should be kind to each other,” he adds.

Brown intensifies the flavors in an already much-beloved recipe of sound, with ten tracks that flow easily from steamy R&B to guitar lashed flights of instrumental fantasy, all the while keeping things right in the pocket. From the first track – the easy breezy, horn-laden smooth jazz single “Come Go With Me” – to the sexy groove of the R&B single “I‟m Pouring My Heart Out” to the gentle acoustic guitar melody of “One Last Goodbye,” Brown shows off the stylistic diversity that has gained him a loyal following. He does so by utilizing some of the tried and true musicians, songwriters, and producers he‟s worked with in the past: longtime collaborator Herman Jackson, bassist Alex Al, drummer Teddy Campbell, rhythm guitarist Jubu, and percussionist Kevin Ricard. He also reached out to R&B production camp Tha Bizness and R&B songwriters Melvin Moore III (who happens to be his godson) and Floyd E. Bentley III from his Kansas City hometown for the hop vocal tunes “I‟m Pouring My Heart Out” and “One Last Goodbye.”

Even his daughter Rochella Brown, a student at the prestigious Berklee College of Music, and her songwriting partners arranged a new version of the Kenny Loggins classic “Celebrate Me Home” (which was co-written by Bob James). Rochella sings with Brown on the beloved gem, which also features a choral contributing from GRAMMY® winning ensemble Sounds Of Blackness. Brown adds that, with a daughter serving in Iraq, he dedicated the song to our troops. “I‟m dedicating that to my second oldest daughter, Kesha, a West Point graduate who is a first lieutenant, fighting in Iraq,” he said. “I think about all the families of these troops and the troops themselves, and „Celebrate Me Home‟ hits it on the head -- we all want to see them come home safely.”

Rick Braun:
“The collective moments are one big unfolding story that’s still not done. I just sit back and be grateful to still be making music with friends,” says the humble trumpeter-flugelhorn player-vocalist Braun, a consistent chart-topper who has amassed a catalogue of No. 1 Billboard Contemporary Jazz chart and radio hits throughout his solo career that began in earnest in 1992.

Kirk Whalum:
Soulful, passionate, stirring...these are the words most often used to describe Kirk’s music. Forged from his Memphis, (TN) gospel roots and his 1980‘s initiation into the thriving Houston, TX nightclub scene, Kirk’s big, rich tenor sound is unmistakably his. The 80’s were highlighted by Kirk’s stepping out of his blossoming sideman role and forming his own band. It was there that Kirk ultimately developed both his “voice” and songwriting in the crucible of the local club scene––especially at a rooftop club called Cody’s. It was also in Houston where jazz pianist Bob James “discovered” him and brought him on tour, which led to five successful albums with Columbia Records, including Cache, Kirk’s first #1 album. As well, Kirk and Bob received a Grammy nomination for their collaboration album, Joined at the Hip. After moving to Los Angeles, Kirk became an in demand session player for top artists like, Barbara Streisand, Al Jarreau, Luther Vandross, Larry Carlton, Quincy Jones and most notably, Whitney Houston, amongst many others. It’s his sax heard on the mega-hit, “I Will Always Love You.” Kirk soon followed that career high point with his phenomenal hit album released on Warner Bros. Records, For You, perhaps the most successful of over 25 solo recordings to date; others include his eclectic, and much lauded, Gospel According to Jazz series,(Chapters 1, 2, 3 and 4). In addition to his many solo projects, Kirk is a member of the popular soul/jazz group, BWB, which features Kirk as the “W” of the group with Rick Braun (trumpet) and Norman Brown (guitar).