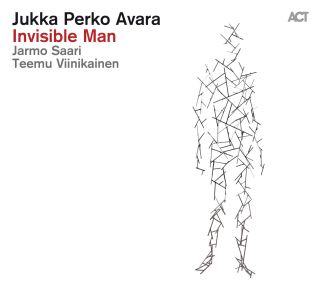 - the sound of the group is surprisingly dense for just three players, with each of the constituent voices supporting and complementing the others

- “Invisible man” may be musically multi-faceted, but is in essence a ballad album. That is because of its core sound, and its story-telling character, but also because of Perko's individual way of doing things

The first thing one notices about Jukka Perko's instrumental trio Avara is its unusual set-up: saxophone, acoustic guitar and electric guitar. While that might seem an outlandish combination, the harmonic inventiveness and the lyricism on the album “Invisible Man” are often so completely jaw-dropping, one has to ask why it hasn’t been tried more often. The sound of the group is surprisingly dense for just three players, with each of the constituent voices supporting and complementing the others.
Elegaic soundscapes reach out into the distance, evocatively shot through with sudden momentary flashes. The prevailing mood might be Finnish-melancholic; but there is always a glimmer of hope. Rather than needing to be loud to establish its presence, this music defines itself with a quiet strength which is all its own.

On “Invisible Man” the three musicians Perko, Saari und Viinikainen have equal entitlement to create the music. There is no role model to fall back on, the conventional demarcation lines between the rhythm section and lead instrument have been eliminated. The principle behind Avara is to give the protagonists complete freedom and the possibilty to stretch out and to develop.
“What interests us is to tell stories and to create extended musical structures,” explains Perko. In fact the whole album is like a single film, a road-movie full of atmosphere, in which strong characterful melodies determine the plot. Whether being entertaining and exciting, or profound and contemplative, Avara definitely stirs the big emotions
“Invisible man” may be musically multi-faceted, but is in essence a ballad album. That is because of its core sound, and its story-telling character, but also because of Perko's individual way of doing things: “My idea of music has changed in the past few years and become more condensed. You could say it has become 'slower,' I mean that in the sense that I am less focussed now on tempo and technique, and much more on depth and meaning. I'm far less interested in the offloading of the emotions of the individual, which have been the dominant factor in jazz for such a long time. What holds my attention far more is interplay. I want all the musicians to be involved all the time, and not to drop back into the role of listeners.” Thinking about it, what is true for the trio is true for the CD listener too. It is clear that Perko and his two band-mates have achieved what they set out to do: they have created music which you can watch as it unfolds before your very eyes.

Jukka Perko
Saxophonist Jukka Perko’s interpretations of Finnish hymns have touched audiences for a whole decade. Albums Kaanaanmaa (2002) and Maan Korvessa (2008) have become landmarks. After hundreds of small ensemble church concerts of matchless beauty, it is time to seek new horizons with a fresh group of players. The jazz-rooted Perko and Teemu Viinikainen find themselves side by side with guitarist Jarmo Saari, often found boldly sailing way outside the musical mainstream.

Avara face the fundamental questions presented in hymns with a soulful simplicity. At times their search for truth and beauty leads into places one can only find by getting lost. Audacity and humility, respect for tradition and search for new ideas, austerity and overflow, acoustic and electric – trio throw themselves into the stream of these opposite energies only to emerge with a fresh view on the familiar.

Teemu Viinikainen
Although power of expression, swing and virtuosity are the corner stones of guitarist Teemu Viinikainen’s (born 1975) music, he is defined by his strong presence and sensibility. These qualities, along with his extraordinary ability to make any ensemble flourish have made him a highly sought-after jazz musician in Finland. We have had the pleasure of hearing his trademark sound alongside big international names such as Joe Lovano, Randy Brecker and Vince Mendoza.

Viinikainen’s strengths lie in his ability to concentrate on the essential and to recognise his limits. These and other unique musical talents enable him to live in the moment and plunge into the flow of music, unafraid to swim against the current. Viinikainen creates a musical landscape that appeals to the ear – his music invigorates the listener.

Saari paints sonic landscapes with his electric guitar, often enriched with electronic effects, human voice and different lesser-known instruments such as the theremin and glass harp. His visual composition style is evident in his works for theatre, cinema, contemporary dance and television. As an artist he feels it is his duty to dive deeper and aim higher in spite of danger, savouring every moment. Jarmo Saari is a true new-generation craftsman, working with his feet on the ground, hands in the dirt and head in the clouds, on his way to outer space.