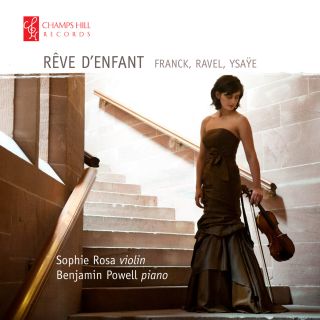 Young, prize-winning violinist Sophie Rosa’s debut album for Champs Hill Records leads with a stunning selection of works by Franck, Ravel and Ysaye, accompanied by pianist Benjamin Powell. The artist writes in her introduction to the CD:

“I still remember the first time I heard the Franck Violin Sonata and the distinct impression it made upon me. I have always found the music of Franck, Ravel and Ysäye incredibly alluring. There is something about the sound world, colours and atmosphere of this music that I find so fascinating. It therefore seemed fitting to choose works of these composers for my debut album at Champs Hill Records.

Having played the Franck and Ravel sonatas for many years, Ysäye’s Rêve d’enfant, Op 14, was a relatively more recent discovery for me and I was particularly struck by its eerie beauty and almost hypnotic qualities. I am pleased to have included Franck’s Andantino Quietoso, Op 6, which is not heard so often in concert halls these days.

To look at this repertoire again in the spectacular surroundings of Champs Hill has been very inspiring. I hope that that you will enjoy listening to these beautiful works just as I will enjoy performing them for many years to come.”

One of the UK's most exciting violinists, Sophie Rosa was awarded the Second Prize and Audience Prize at the 2nd Manchester International Violin Competition 2011. She has performed across the UK
as a recitalist in venues including the Royal Festival Hall, the Purcell Room and Bridgewater Hall as well as appearing with the Royal Liverpool Philharmonic Orchestra and the Manchester Camerata. Sophie has broadcast for Radio 3 and Classic FM.

Sophie has performed regularly throughout the UK and internationally from a very young age. In 2006 she was a finalist in the BBC Young Musician of the Year Competition and was the First Prize winner of the Lions European Music Competition, Cannes. Sophie studied at Chetham’s School of Music and the Royal Northern College of Music. She was a recipient of the RNCM Gold Medal and was also awarded the Worshipful Company of Musicians Silver Medal in recognition of her musical achievements. Sophie was also a recipient of the MBF Ian Fleming Charitable Trust Award. After completing her Masters Degree with Distinction, Sophie completed the RNCM International Artist a in Solo Performance and furthered her studies in America with Midori Goto, Miriam Fried and Donald Weilerstein.

Sophie currently plays on a Joseph Gagliano violin dated 1795 made available through the generous support of the Stradivari Trust.