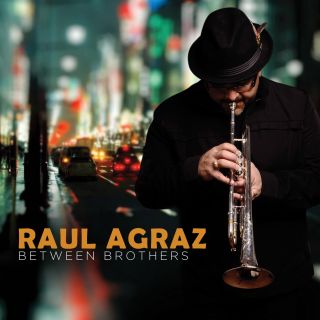 Percolating with a combination of latin rhythms, bossa nova, swinging big band arrangements, traditional Venezuelan rhythms, and tender arrangements scored for strings, "Between Brothers" marks the dynamic solo debut of Venezuelan trumpeter Raul Agraz. Along with the electric talents of Dave Samuels, Paquito D’Rivera, Luis Perdomo, and Luisito Quintero, Agraz has created a dazzling set of music, dedicated to the musical brothers who came together to make the recording a reality. Beginning his professional career with the Venezuela Symphony Orchestra, the top call New York trumpeter has performed with Celia Cruz, Tito Puente, Oscar D’Leon, Mingus Big Band and The Vanguard Orchestra.
Trained in the legendary musical conservatory of Caracas, Venezuela this trumpet player is indeed one of the most comprehensively prepared musicians alive today. Raul is a complete master of Jazz, Afro-Cuban and Classical repertoire in a way that almost defies description. Equally at home playing the music of Bach, Machito or Coltrane, Raul lends a text book perfection to everything he does. From his burnished tone and clock-like precision as a sight reader to his incisive solo skills this guy is "the definition of a trumpet player's trumpet player." - Oscar Hernandez.

Born and raised in Venezuela, his musical career began to take shape at the age of 7 with the internationally known choir, "NiÃ±os Cantores De Villa de Cura". With this choir, he traveled to many international choir congresses throughout the world, including performances in France, Spain, USA, Belgium and Vienna.

About this same time, he began to play flute and French Horn, but at 9, he discovered his passion, the trumpet. In a very short time he became the principal trumpet for the orchestra accompanying the same choir.

He attended the Jose Angel Lamas School of Music in Caracas to begin his formal classical education with Albreth Egon, the principal trumpet of the Venezuela Philharmonic.

After a long career in Venezuela, having the opportunity to work and record with the most important Artists of his country, he relocated to New York in 1996 and began to study with one of the greatest, Victor Paz.

Throughout his career he's had the opportunity to perform as a lead trumpet player in a variety of styles as: Jazz, Rock, R&B, Latin, and classical, recently he was invited to record the new theme for the Super Bowl with the New York Philharmonic, sitting next to the master Phil Smith and with conductor John Williams. - See more at: http://originarts.com/oa2/artists/artist.php?Artist_ID=148#sthash.2SDBXVRj.dpuf