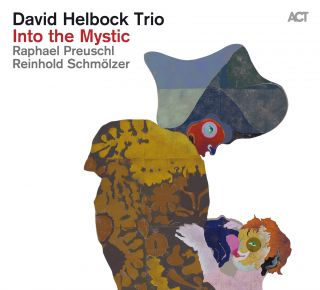 Catalog number: ACT 98332
Releasedate: 02-09-16
- David Helbock is one of the most exciting players of the young European jazz scene

- the listener experiences something new when he plays this mystical music

The act of creating, playing and improvising is a very mysterious experience in itself, which is hard to describe, because rational thinking stops when inspiration begins.

I’m fascinated by mystical elements in mythology. I find some of these mystical stories in old Greek mythology, like the myth of Greek god Eros, to whom I dedicated a composition but also modern films or modern art can fulfill a mystic function in society. For example, the work of Joseph Campbell, an american mythologist, was the main influence for the Star Wars movies.

Hafez, the persian Sufi-Poet of the 14th century, told this mystical legend, which inspired me to write „The Soul“: The sorcerer creates man by forming a body and asks the soul to get into this empty shell. But the soul refuses to be captured in this prison cell, it just want to fly and be free. But then the sorcerer creates music and to physically feel this trance, also being able to dance - the soul enters the body. According to this myth, music is not only food for the soul - music is the reason why we have a soul, even more - the soul itself is music.

Two rewards and the audience prize at the world biggest jazz-piano-solo competition of the Jazzfestival Montreux, a lot of enthusiastic/international reviews for his CDs and the most important prize in Austria 2011 - the "Outstanding Artist Award" - David Helbock, the pianoplayer coming from a small little village in Austria called Koblach, is with no doubt, on his way up to a great international musical career.

Helbock is not only a great pianist, he is also a very individual thinker, who is investing not only a lot of dexterity but also quite an amount of brain activity to his projects.

David Helbock, born on the 28th of january 1984, began playing the piano at the age of six.
He studied at the Feldkirch Conservatory with Prof. Ferenc Bognar, where he finished 2005 with an "excellent" degree in performance and since 2000 he took lessons with the New York jazz pianist Peter Madsen, who became his teacher, mentor and friend.

Since the start of his musical career David Helbock is also very active as a composer. One of his works is among others a big  „One-Year compositional project“ where he wrote a new piece every day for a whole year. (In April 2010 his "Personal Realbook" with over 600 pages of music was released)