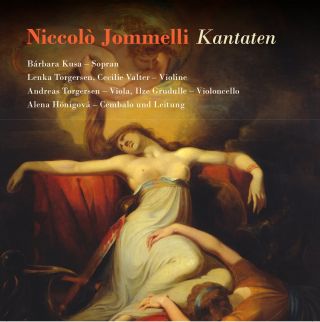 - Alena Hönigová is one of the leading musician from the Czech republic in the Early music field and teaches at the Schola Cantorum Basiliensis at the Swiss Bale town.

This recording presents the highly praised composer Niccolo Jommelli, who was already known by his great operas and oratorios, in a more intimate light. He was heavily talented to express dramatic effects and passionate feelings. On that reason he was very often called “the Italian Gluck.” For a lot of his contemporary colleagues he had been regarded as the innovator of special sound effects for the orchestra, which he defined as musical colors which on a later stage had been ascribed to Stamitz. There was a saying that some from the audience jumped from their seats during the crescendo and only realized during the diminuendo that they had stopped breathing when Jommelli presented these affects in Rome the first time. Soprano Barbara Kusa comes from Argentina. She studied at Pontificia Universidad Catolica Argentina and then in Buenos Aires. After coming to Europe in 2004 she studied early music at l’Ecole Nationale de Musique de Pantin in France. She is an internat

Alena completed harpsichord studies at the Prague Academy of Music, going on to complete

on the harpsichord, fortepiano, thorough-bass and improvisation (with Andrea Marcon,

and piano répétiteur at the Schola Cantorum Basiliensis. In 2002 Alena Hönigová formed the

Ensemble Muscadin, with which she has premiered several contemporary works, including

the chamber opera Racine´s Esther by Boris Yoffe in 2006. She was organiser of a concert

concert series of sacred baroque music in the Dominican monastery of St. Giles in Prague,

and since 2012 she is promotes a Music Festival at castle Jezerˇí in north Bohemia, centering

on composers connected to Prince Joseph Franz Maxmilian Lobkowicz (1772-1816), the

famous patron of Haydn and Beethoven.

As a soloist, accompanist and chamber musician, she frequently collaborates with many

early music ensembles and soloists. As a recording artist, she appeared on numerous solo

Sebastian Bach: Sonatas for flute and harpsichord (together with Corina Marti, Editions du

Nopal, Fr), Salomone Rossi: The Song of Solomon –a collaboration of Ensemble Muscadin

(Koramantrecords, CH, KR 11001). She records for Czech Radio not only as interpreter but

also programs her own radio shows on special themes in early music.