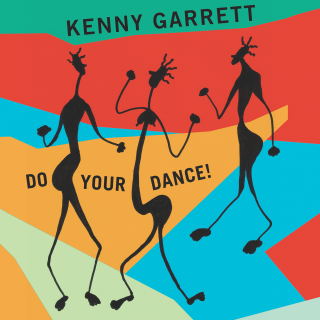 More than any other artist in traditional jazz today, saxophonist/composer/arrange rKenny Garrett and his band are known to entice audiences to want to get up and groove. Be it in Spain where a man from Cameroon leaped up and broke out some African moves then was joined by a young break-dancer, or in Germany where a clearly classically trained ballet dancer was brought to his feet; in Poland where a fan literally jumped from the balcony onto the stage to dance, or at a festival in Barbados where music lovers got on up and grooved in the rain to “Happy People,” the spectacle is always the same: the spirit takes over and the movements come naturally. It is this spirit that Garrett has instigated and witnessed from stages around the world that fills Do Your Dance!—the saxophonist’s fourth for Mack Avenue Records.

“I look out and see people waiting for the songs that they can party to and express themselves,” confirms Garrett, the nine-time winner of DownBeat’s Reader’s Poll for Alto Saxophonist of the Year. “Do Your Dance! was inspired by audiences moved to rise from their seats and ‘lift a foot!’ Some are reluctant to participate because they think that others are better than they are. I tell them, ‘Do your dance.’ That means even if you have to ‘stay pocket,’ do the Funky Four Corners or the Nae-Nae, don’t worry about what the other person is doing. Let it all hang out and ‘do your dance!’ On the title track we combine the spirit of a `70s-style beach get down with just a touch of hip-hop—ever in search of the link between the two. I had it playing while I was talking to my daughter on Facetime. When it got to the end with that new vibe, she smiled and I thought, ‘Uh huh—gotcha!’”

Do Your Dance! is a travelogue of rhythm from the melodic lilt of “Calypso Chant” and the soothing, Brazil- inspired “Bossa” to the summer barbecue spirit of “Backyard Groove” and “Philly.” Kenny elaborates, “‘Philly’ was inspired by people at an outdoor festival we played down the street from Temple University. That older generation was going in—dancing to hard bop, funkafied fire and calypso...anything we threw at them! That’s how people used to dance to jazz.”

It was inspiration in liquefied form that resulted in the novel “Wheatgrass Shot (Straight to the Head),” one of two tracks featuring rapper Mista Enz (Donald Brown, Jr.) of Knoxville, Tennessee. Recalling the tune’s circuitous origin, Garrett explains, “A nurse friend told me about the health benefits of wheatgrass. You can cut it with honey or fruit juice but I took it straight to the head, and the bitterness sent my body into contortions (another form of dance). Later, I was at the piano messing with this minor 2nd interval. I recognized it as a musical metaphor for that wheatgrass going upside my head! As the music took shape, I felt it needed a rap.” Garrett reached out to several sources, then co-producer Donald Brown gently intervened, offering, “My son raps.” Enter Mista Enz.

“The first track Kenny emailed me sounded like they turned on a tape recorder mid-session,” Enz confesses. “I thought it was gonna be impossible to write to, but it was an honor for Kenny to consider me, so I had to make it work. I didn’t have time to try the wheatgrass, so I typed it in on the Internet. Kenny told me the effect it had on him was like a ‘shot to the brain.’ I equated that to euphoria...the way a woman makes you feel. I did part of it freestyle and part of it written to stay on subject. Kenny called back and said it was exactly what he was looking for.”

Rounding out Do Your Dance! are “Persian Steps” (built from the ground up with just Ronald Bruner, Jr. on drums and Garrett on piano, later adding flute, a chant and shruti box—an Indian accordion he discovered in Germany) and “Chasing the Wind” (Garrett composing a piece at top speed in the tradition of bop standards that jazz musicians challenge themselves with by playing at triple time). Garrett dedicated “Waltz (3 Sisters)” to his fairer siblings. “My sisters have always been my support system in every way. Wherever I show up, they’re the first ones there. Sometimes you take it for granted because that’s family...but it doesn’t have to be that way. So I wrote one for them.”