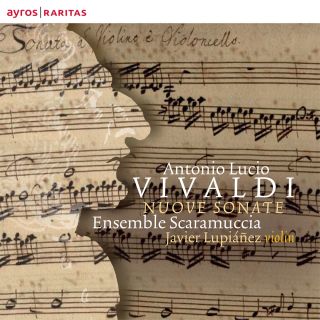 The ensemble Scaramuccia began in 2013, thanks to violinist Javier Lupiáñez's quest to rediscover the lesser-known baroque repertoire. Scaramuccia's purpose is to bring back to life the repertoire of which one could listen not only in the most refined circles, but also in the taverns and on the streets of the baroque past. Along with Vivaldi, this release features Prete Rosso's recently-rediscovered works. This recording is aiming to be part of the new history, featuring these recently discovered works.

Scaramuccia was born in 2013 thanks to violinist Javier Lupiáñez’s intention of rediscovering the less-known baroque repertoire. The spirit of Scaramuccia is that of bringing back to life the repertoire which one could listen not only in the most refined circles, but also in the taverns and on the streets of the baroque past. Behind each one of their programmes, there is an intense investigation project which makes it possible to rediscover these musical gems hidden amongst the vast amount of baroque music that is usually performed.
Scaramuccia made their first appearances in Bruges Festival Fringe and Utrecht Festival in summer 2013, with a warm reception from both the audience and the organisers. Nowadays they have an intense concert schedule that includes the Netherlands, Belgium, the United Kingdom, Germany and Italy. Amongst other performances, Scaramuccia has played at the Maldon Festival of Arts (uk), the Muziekmuseum Vleeshuis (Belgium), the Kasteelconcerten concert series (the Netherlands) and the Echi Lontani Festival (Italy).
Their eagerness to discover new music led Scaramuccia to the privilege of claiming for the first time that Vivaldi was the author of the rv 820 and the rv 205/2. They also had the pleasure of performing both pieces in a world première which was broadcast by the program ‘De Musyck Kamer’ of Duch radio station Concertzender, in summer 2014.
Scaramuccia was awarded the Audience Prize in the Göttinger Reihe Historischer Musik 2015/2016 competition.