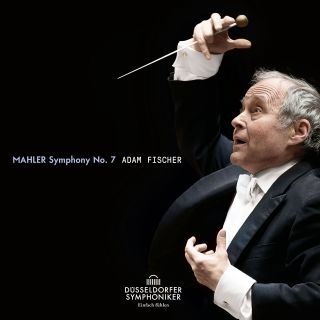 - Adam Fischer is one of the highly reputated conductors in the music world, he conducts the Vienna and Berlin Philharmonic, at the Met, Staatsoper Vienna und Berlin and more

- he is also chief conductor of the Düsseldorf Symphonic.


In setting out to record the complete symphonies of Gustav Mahler with the Dusseldorfer Symphoniker, Maestro Adam Fischer hoped to create something special with the ensemble. He hoped that conductor and musicians would mutually inspire one another, not creating Fischer’s Mahler, but rather “our” Mahler. Fischer writes of this process: “Whenever I conduct Mahler, I attempt to find a way to formulate each symphony’s world and its emotional content in a way that I can apprehend. Out of the music, I spin stories for myself… It is the result of a long process, in the course of which I ensure that the scores become my innermost conviction. In my view, this is the conductor’s task. It is exactly the opposite of “work-to-rule.”

At the beginning of the 2015/16 season, Adam Fischer was appointed Principal Conductor of the Düsseldorfer Symphoniker and Artistic Consultant of the Düsseldorf Tonhalle. He is also Honorary Conductor of the Austrian-Hungarian Haydn Orchestra, founder of the Eisenstadt Haydn Festival, and founder and director of the Wagner Festival in Budapest. Born in 1949 in Budapest, Adam Fischer studied composition and conducting in the Hungarian capital, and with professor Hans Swarowsky in Vienna. Fischer’s award-winning CD releases include the complete symphonic works of Haydn (distinguished with the German national prize “Echo Klassik”) as well as of Mozart. He has also been awarded the Grand Prix du Disque twice: for his recordings of Die Königin von Saba (Goldmark) and of Bluebeard’s Castle (Bartók).