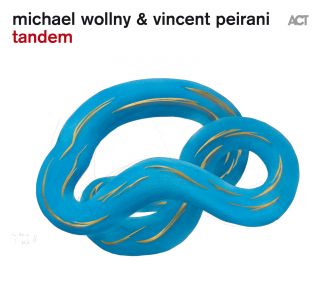 - beautiful combi of piano and accordion

- their collaboration is most definitely going places!

Both of the original compositions by Wollny take the listener off in experimental and expressionist directions. The dialogue between them constantly brims with ideas, and they also have a perfect way of circling in and out of each other’s way. At one moment Wollny might be keeping quiet in some reassuring chords, but then he can break out into a fiercely wild passage, or he might lean into the piano to extract some muffled percussive sounds from it. As for Peirani, he can give the solidity and the seriousness of a church organ, but will also chirrup in little commentaries at the top of his instrument’s range, or deliver volleys and cascades of notes at improbable and probably illegal speeds. This duo of superb musicians can simultaneously be highly refined, and yet completely off-the-wall. They are two of the brightest lights of the international firmament of jazz as seen through a European prism. They have also put down a marker with “Tandem”: their stellar collaboration is most definitely going places.
Michael Wollny
Michael Wollny, born in 1978 in Schweinfurt, internationally successful jazz pianist, music inventor, unconventional thinker, popular figure. Nobody plays piano like him. His trademark: the unpredictable, the quest for the never-before-heard, the courage to devote himself to the moment, to make the unforeseen sound self-evident. His desire to keep reinventing himself, both in terms of sound and composition; that is what makes him a “consummate piano maestro” (FAZ) and “the biggest (jazz) musician personality that Germany has produced since Albert Mangelsdorff” (Hamburger Abendblatt).