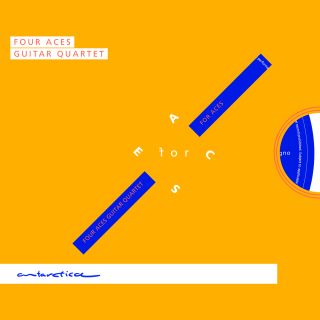 Four Aces Guitar Quartet combines classical masterpieces and arrangements of traditional folk and pop music. If previous album Odyssee was the story of a five year journey as an ensemble, then For Aces not only continues that journey, but it chooses a new adventurous path with compositions especially written for this cd. The composers with whom the quartet collaborated are Clarice Assad, Adam Clarke, Nuccio D'Angelo, Nejc Kuhar, Patrick Roux, Harry Sacksioni, Alain Selhorst and Johannes Möller.

The Four Aces Guitar Quartet was formed in 2008 when four Belgian classical guitar players met at the International Guitar-Symposium in Iserlohn. Their first concert was part of a graduation project where they overwhelmed the audience as well as the jury with a boldly chosen program, great virtuosity and a richness of color and musicality.

After making their debut the Four Aces were invited to play recitals throughout the country, including a concert in Bozar, one of Belgium’s most prestigious cultural venues. In addition to performing in these halls, the quartet also played live shows on Dutch radio station Radio 4 and on Belgian classical radio Klara.

The quartet has attended masterclasses with some of the most renowned guitar players in the world, such as Aniello Desiderio, the Katona Twins, David Russel and Johan Fostier. Another highlight was playing together with Grammy Award winning guitarist and founding member of the Los Angeles Guitar Quartet, Andrew York.

Over the years, the quartet has played concerts in Belgium, the Netherlands, France, Germany and China. In 2011 they were the first guitar ensemble ever to play the semifinals of the International Chamber Music Competition in Illzach, France. In the summer of 2013, they were asked to give masterclasses at the International Guitar-Symposium in Iserlohn, one of the biggest classical guitar festivals in Europe. Later that year they won Supernova, a Belgian chamber music competition that ensures partnership with several radio and television networks and is supported by the Belgian government.

On their second album Odyssee the quartet tells the story of a five-year collaboration as an ensemble by presenting each composition with a unique story, emotion and memory. This Odyssey even took them to China’s capital Beijing for a ten day concert tour and opened a lot of opportunities to the rest of the world.

The Four Aces Guitar Quartet explores the world of the classical guitar by playing compositions for guitar quartet by Bellinati, Bogdanovic, Roux and many more. Besides exploring this marvellous world, they also like to expand it by playing arrangements of masterpieces written by well-known composers such as Bach, Puccini and Tchaikovsky, but also by arranging traditional folksongs and pop music.

A concert by the quartet guarantees a memorable evening filled with musicality, emotions and beauty, with a slight touch of humor.