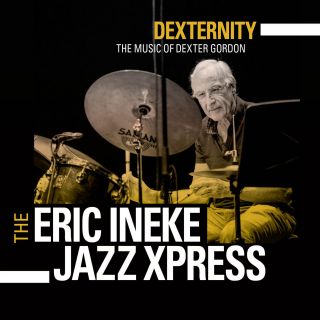 Catalog number: DBCHR 75225
Releasedate: 16-09-16
- tribute album by Dutch drummer Eric Ineke who used to be part of Dexter’s ‘Dutch working band’ back in the seventies

Normally when Dexter toured in Europe back in the sixties and seventies, it was as a solo musician picking up local rhythm sections in each city along the way. But in Holland, he had a “working band” with Rein de Graaff on piano, Henk Haverhoek on bass and Eric Ineke on drums.
The main reason for this was that their booker Wim Wigt managed to find gigs in Hilversum, Leiden, Veendam, Venlo, Zwolle, Den Haag, Heemskerk, Amsterdam, De Woude, Rotterdam, and Eschede. When Dexter would tell people about all the towns he had played in during his time in Holland, they were incredulous. He would tell them that there were jazz lovers in all these places in a country the size of the state of Maryland.

Dexternity is a tribute by 'the working band drummer' Eric Ineke. This tribute includes some of Dexter’s signature compositions including Fried Bananas, The Panther (composed in tribute to the Black Panthers), Tivoli, Boston Bernie, Sticky Wicket, Soy Califa, Mrs. Miniver, and Cheese Cake. They have also included the classic Body and Soul,  the composition that “must” be played every night, according to Dexter Gordon.
Eric Ineke (born Haarlem, April 1, 1947) is a Dutch jazz drummer who started his career in the 1960s. In 1969 he made his first record with tenor saxophonist Ferdinand Povel and through the years he has played with the Rob Agerbeek Quintet, the Rein de Graaff/Dick Vennik Quartet, the Ben van den Dungen/Jarmo Hoogendijk Quintet and the Piet Noordijk Quartet. During his career he has also played with numerous international, mainly American soloists like Dexter Gordon, Johnny Griffin, George Coleman, Shirley Horn, Dizzy Gillespie, Al Cohn, Grant Stewart, Jimmy Raney, Barry Harris, Eric Alexander and Dave Liebman, recorded numerous CD’s and appeared at many national and international jazz festivals (North Sea Jazz Festival, Nice Jazz Festival, Pescara Jazz, San Remo, Athens, Toronto Jazz Festival, Montreal International Jazz Festival and New York). For more than 35 years he has been the drummer of the Rein de Graaff Trio and since 2006 has led the Eric Ineke JazzXpress, a quintet in the hard-bop tradition. With this quintet, Eric Ineke got invited in 2011 by the American Jazz Museum in Kansas City with jazz singer Deborah Brown where they did a few performances, including one on Kansas Public Radio and a CD recording produced by Bobby Watson.  Eric Ineke also teaches at the Royal Conservatory of The Hague. Eric Ineke is giving masterclasses all around the world. In April 2012 he released his first book The Ultimate Sideman, in conversation with Dave Liebman.