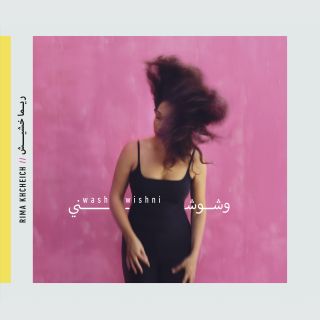 - Washwishni means 'Whisper to me'

- this time the Dudok String Quartet is added to the line up, which gave the songs a rich and refined sound. It also revealed the depth of the music

- All songs are newly composed for Rima by: Rabih Mroué and Fouad Abdel Majeed,  co-compositions by Rima and Rabih, except for the Cole Porter’s My Heart Belongs To Daddy, with Arabic lyrics by Rabih Mroué 'Wa’ti Assir'

The band of Rima Khcheich is a result of many years of collaboration with Dutch bassist Tony Overwater, gathering the finest musicians from Europe like Maarten Ornstein on clarinet, Maarten van der Grinten on guitar, percussionist Ruven Ruppik. On the album she also invited the Dudok String Quartet and trumpet player Angelo Verploegen, creating a unique new sound recorded in Holland’s famous Wisseloord Studio.

Rima Khcheich is Lebanon’s most prominent singer of the ‘younger' generation. She is well known for her qualities as a classical Arabic singer and the way she transforms this music to a contemporary new sound. Together with her Dutch musicians she developed a style of music that uses the best of both worlds, beautiful melodies and complex rhythms of the Arabic tradition combined with the advanced harmony and improvisation of the European music.

After five successful albums combining classical repertoire with contemporary music she now recorded her latest album Washwishni with fifteen newly composed songs. She wrote most of the songs in collaboration with Lebanese artist and director Rabih Mroué and some of the compositions were specially written for her by Egyptian composer Fouad Abdel Majeed. The songs form an almost satirical comment on the concerns of the younger Arab generation such as immigration,religion, revolution and love.
Rima Khcheich is currently considered the foremost singer of her generation and is known for both her classical singing skills as the ability to combine the Arab tradition with contemporary western music. Satirically she cuts topics as immigration, religion, revolution and love.