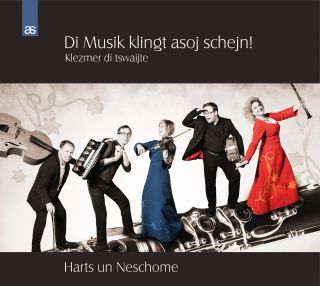 “A violin found a melody”, so it says when speaking of the origins of Klezmer music. It has been 10 years since the Klezmer ensemble “HARTS UN NESCHOME” began collecting and arranging such melodies. They have studied Jewish culture and its instrumental music, which in itself often comes with strict customs and traditions, and also have become increasingly aware of their own involvement in the revival of this culture. The overwhelmingly enthusiastic response of their concert audiences and the immense success of their first CD “From Yiddish...to Klezmer” have encouraged these Klezmorim to celebrate their 10th anniversary with the recording of a new CD, entitled “Di Musik klingt asoj schejn - Klezmer di tswaijte” (“The music sounds lovely – Klezmer, the second”). Not only can the fans of “HARTS UN NESCHOME” look forward to a new round of live concerts, as expected played with much heart and soul, but can now also enjoy their wonderful music at home.

Anja Bachmann born in Bremen, studied clarinet and saxophone in Bremen and Berlin. Since 1994 she has been solo clarinetist at Mittelsächsische Philharmonie Freiberg. Highlights of her solo career include Weber’s Clarinet Concerto, Glazunov‘s Saxophone Concerto, Martin Romberg‘s “The Tale of Taliesin“ as well as performances of Mozart‘s Clarinet Concerto at MDR Summer Festival. Further notable highlights were the first performance of Hans-Peter Preu’s “New York Jazz Suite“ with WDR Radio Orchestra & Andy Miles, and the recent world premiere of Preu’s Suite for Clarinet 2x4/Saxophone “Since we first met“ with Hans Christian Wicke. Bachmann’s creative work also concentrates on chamber and church music, she is a member of the music groups “Trio Stiletto“, “Timeless Harmony“ as well as “Con Passione“.