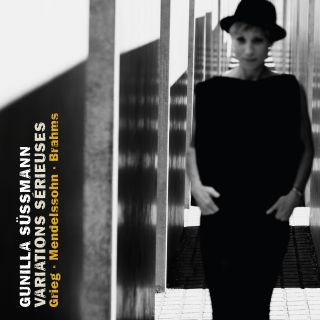 Catalog number: AVI 8553360
Releasedate: 28-10-16
The art of variation has close ties with the art of improvisation. Audiences revere musicians who can extemporize on a given theme, presenting it with refinement and elaborately increasing its effect. That kind of spontaneous music-making boomed in Mozart and Beethoven’s day: competitions pitting one star pianist against another were all the rage. Such improvisations gave rise to sets of variations which introduced the theme at the beginning and declined it according to skill. Gunilla Süssmann has selected three sets of variations featuring themes with widely different origins and treated in thoroughly different ways.

In recent years, Norwegian pianist Gunilla Süssmann has been reaping steadily increasing acclaim and has become a much sought-after artist on an international level. Her virtuosity, combined with strong sensitivity and imagination, is highly praised, and her thoroughly personal, passionate interpretations forge a unique bond with audiences and critics. She has performed in venues such as Concertgebouw Amsterdam, Wigmore Hall, the Louvre, and Festspielhaus Baden-Baden, and is a popular guest at major chamber music festivals in Norway and across Europe. The English Chamber Orchestra, the Bournemouth Symphony Orchestra, the Oslo Philharmonic, the WDR Cologne and the Staatskapelle Weimar are amongst the many orchestras with whom she has played. Chamber music holds a special place in her heart, and the core of that devotion is her 12-year collaboration with cellist Tanja Tetzlaff. Critics describe their symbiotic playing as magical, and the duo has recorded two CDs on the Avi label.