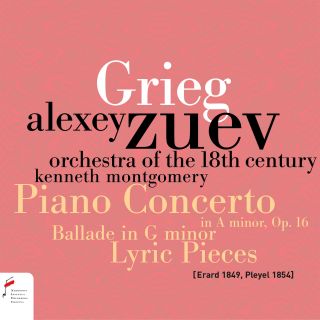 Catalog number: NIFCCD 106
Releasedate: 20-01-17
- these works of Edvard Grieg are played on period instruments (Orchestra of the 18th Century)

Grieg on period pianos
This release by the Fryderyk Chopin Institute is not just another recording of Grieg’s Concerto in A minor – a work that belongs to the core repertoire of virtually every piano virtuoso. Thanks to a joint decision taken by the soloist, the conductor and the musicians of the Orchestra of the Eighteenth Century, this popular work, bearing strong echoes of the romanticism of the first half of the nineteenth century – not just the works of Schumann, but also Hummel, Mendelssohn and, perhaps most of all, Chopin – has assumed a quite singular aural apparel. (…) This difference reveals hitherto unknown aspects of Grieg’s music. (…). The 1849 Erard, so very different from modern-day pianos, brings many surprises, and, in dialogue with an orchestra excelling in the performance of music from even earlier times, it is capable not just of pleasantly surprising us, but also of irritating, moving and perplexing us … so different have our experiences been to date.
This disc, comprising two complementary parts (a recording of a concert given during the Chopin Institute’s festival ‘Chopin and his Europe’ and solo studio recordings), adheres to the artistic programme that has been followed by the Institute since 2005, one of the fundamental premises of which is to introduce contemporary listeners to the authentic sound of Chopin’s era, as broadly understood.

Born in St Petersburg, Alexey Zuev gave his first public performance at the State Cappella aged 8, having taken up piano studies at the School
of Music and later the Special Music Conservatory School in St Petersburg. Alexey Zuev holds numerous prestigious international awards including overall winner of the St Petersburg International Prokofiev Competition in 1999, the Educational Award from the 2002 London International Piano Competition, prize winner at the 2008 Sviatoslav Richter International Competition and 2nd prize winner at the prestigious Géza Anda Piano Competition in 2009. Highlights this season 2015/2016 have included his London concert debut with the London Philharmonic Orchestra and Vladimir Jurowski at the Royal Festival Hall, the Netherlands Philharmonic Orchestra at the Concertgebouw,the St Petersburg Philharmonic Orchestra conducted by Vassily Sinaisky, with Musikkollegium Winterthur conducted by Alan Buribayev. Recent recital highlights include a performance with Alexei Lubimov at the Moscow International House of Music and recitals at the Engelgardt’s House, St Petersburg, the ‘Chopin and his Europe’ Festival in Warsaw and the Ravinia Festival, USA. Further notable performances in the past include concerts with Georg Solti’s ‘World Orchestra for Peace’ in St Petersburg and Moscow with Valery Gergiev. Festival appearances include the Kreuth Festival, St Gallen Festival, the Kissinger Klavier-Olympiade, Sommer and Kissinger Winterzauber Festivals, the Mecklenburg-Vorpommern Festival and ‘Alpenklassik’ in Bad Reichenhall.
Alexey Zuev’s CD debut of works by Weber, Schubert and Brahms was issued in 2008 on the ‘Russian Virtuosos’ series by Art-Classics (Moscow). A live recital disc of works by Beethoven, Stravinsky, Schumann, Chopin and Marina Schmotova was released in 2012. Alexey’s performances of Schumann, Liszt and Debussy at the Ruhr International Piano festival are also available on disc.His collaboration with Alexei Lubimov saw the release of Debussy’s Trois Nocturnes and Prelude ∫ l’apr¯s-midi d’un faune (arranged for four hands) on the critically acclaimed five star ECM release of 2012.