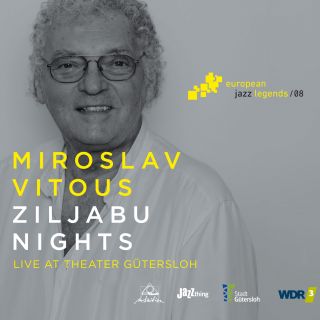 Catalog number: INTCHR 71320
Releasedate: 14-10-16
- volume 8 of the prestigious series "European Jazz Legends"
This recording of Miroslav Vitous is the eighth publication in the “European Jazz Legends” series. In hindsight, “Infinite Search,” the title of Miroslav Vitous’ first album as a leader from 1970, which featured players like Herbie Hancock, John McLaughlin, Jack DeJohnette, or Joe Henderson, seems prophetic. The bassplayer, composer, educator, former member of the Czech Olympic swimming team, co-founder of the trailblazing group “Weather Report,” and the man behind “the go-t string library for producers and film composers,” is still constantly on a quest, and never without a project. At 68, Vitous is far from retiring, working on a symphony, preparing gigs with a Big Band or the Prague Symphony, and occasionally presenting his music in concerts with his current group. This live recording from the Theater Gutersloh presents him with his band- featuring Aydin Esen on keyboards, Roberto Gatto on drums, and Gary Campbell and Robert Bonisolo on saxophones, int
Miroslav Vitous, born in Prague in the year 1947, is in fact a "European Jazz Legend". He started playing the violin at age 6, the piano at age 10 and switched to bass at age 14. He studied at Prague conservatory and at Berklee School of Music in Boston, Massachusetts. 1967 he performed with Miles Davis and soon after joined Chick Corea´s group to record the album "Now He Sings, Now He Sobs". 1970 he was a founding member of the legendary super group "Weather Report", but replaced already in 1973. In his ongoing carreer he play with Freddie Hubbard, Wayne Shorter, Herbie Hancock, Jan Garbarek, to name just a few. In recent years he returned to Prague and is still performing, conducting, composing, and arranging.