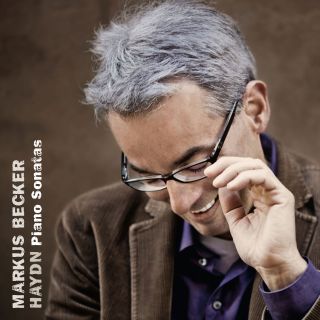 Catalog number: AVI 8553369
Releasedate: 25-11-16
Haydn's piano sonatas have thrilled me since childhood. This music may seem easy to grasp at first glance: so much seems clear and straightforward. However, once you take a closer look and spend more time playing and listening to Haydn's music, it develops an endless, multifaceted life of its own. It becomes more concrete and at teh same time it develops an endless, multifaceted life of its own. It becomes more concrete and at teh same time more mysterious. Unexpected turns of phrase, sudden occurences, humorous juxtapositions and startling asymmetries are just as much a part of this music as its extended melodic arcs that make the piano sing. Haydn's music forms an intimate bond between song and speech. In each movement of the ca. 60 piano sonatas he wrote, we meet a personality, an unmistakeable character, evoked in detail. Haydn was long viewed as teh mere forerunner of vienna Classicism - Mozart and Beethoven's Papa, so to speak. His sonatas were mainly regarded as witty, useful pedagogical material. Several generations seem to have been unaware of his profoundly nuanced approach. Perhaps, however, Haydn's keyboard oeuvre might require even better interpreters than the works written by his towering colleagues. One cannot clothe this music in an adequate form without applying a great deal of fantasy in one's choice of timbres, along with a keen sense for musical thetoric and careful regard for phrasing. Most of all, the Haydn performer should be able to modify the entire timbre effect and redistribute the balance among parts from one moment to the next. We must not forget that he was born way back in 1732: Haydn thus still had one foot in the Baroque age, as one can tell from the latent polyphony and frequent figures of musical rhetoric. His variegated types of articulation cover a wide spectrum: dozens of nuances fill out the range between Haydn's profound, songlike legato and his humorously accentuated staccato. Here is not where we will find Beethoven's force and dramatic vigor, neither Mozart's ethereal beauty. Haydn wrote a music of profound humanity, with a basic outlook similar to what the German Romantics called humor': a reflection of human life with all its beauties, unfathomable depths, hopes, losses, crises and joys, all shouldered with a large dose of passion and irony.

“As a musical virtuoso, Markus Becker is unbeatable – an intelligent creator of soulful musical portraits.”Eleonore Büning, Frankfurter Allgemeine Zeitung. Born in 1963 in Osnabrück, Markus Becker has convinced audiences and critics alike as a highly formative interpreter of piano literature from Bach to Rihm, an eminent artist on the international scale who is noted for his original programming choices. Exceptionally among classical pianists, he also stands out as a virtuoso jazz improviser. Becker makes regular appearances at the Ruhr Piano Festival, the Schleswig-Holstein Music Festival and the Kissingen Summer Festival. Markus Becker has played with orchestras such as the Berlin Philharmonic, RSB Berlin, the radio symphony orchestras of the NDR, WDR and SWR in Germany, and the BBC Welsh Orchestra under such conductors as Claudio Abbado, Howard Griffiths, Michael Sanderling, and Thierry Fisher. Becker’s chamber music partners include Albrecht Mayer, Nils Mönkemeyer, Adrian Brendel, Igor Levit, Sharon Kam and Alban Gerhardt. He studied with Prof. Karl-Heinz Kämmerling and received additional crucial guidance for many years from Alfred Brendel. Since 1993, he has been a professor at the Hanover Academy of Music, Theatre and Media, where he supervises a class of pianists and chamber ensembles, oversees the Masters Degree department, and directs the Chamber Music Institute.
With his CD recordings, Becker is the three-time winner of the ECHO-Klassik award as well as the German Critics Choice Award, along with a number of further distinctions from the international music press (Gramophone, Fono Forum, Klassik Heute, BBC Music Magazine, American Record Guide).
Becker's recording of Max Reger’s complete piano works on 12 CDs (Thorofon) is already considered legendary. Fono Forum's assessment of this encyclopaedic feat: “One of the rare and truly major achievements of German piano artistry in the past 50 years.”