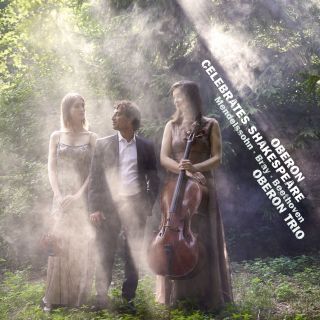 Catalog number: AVI 8553367
Releasedate: 25-11-16
Ten years ago, in 2006, three musicians got together to play Mendelssohn. The trio eventually started looking for an appropriate name, and they eventually found their 'patron' in Oberon, one of the characters in Shakespeare's play A Midsummer Night's Dream. The King of the Elves embodies the pleasure anyone can find in metamorphosis, in games and creativity, and that remains this musical trio's creed until today - the will to remain flexible at all times, avoiding any sort of routine in music-making and programming. 'We 'compose' our programmes with great care', affirms cellist Antoaneta Emanuilova. The year 2016 also marked the 400th anniversary of William Shakespeare's death: the trio thus decided to combine both jubilees in one programme. Since contemporary music is also part of the three musicians' repertoire, they commissioned a new work. 'We wanted it to be up-to-date, but something that would nevertheless have a connection with our namesake', explains violinist Henja Semmler. They suggested this idea to British composer Charlotte Bray whom the trio's pianist Jonathan Aner met by chance at a concert in Berlin four years before, when she had just moved to the German capital. Now in her mid-thirties, she has written a great amount of chamber music, and her cello concerto has been featured at the BBC Proms. 'A magic spell must have been at work: just then, Charlotte was working on a trilogy of piano trios that were to be influenced by Shakespeare', the pianist recalls. Thus, after her first piano trio entitled Those Secret Eyes which had been inspired by Shakespeare's Macbeth, Bray decided to search for inspiration int eh dreamworld of Oberon for her next work in the same genre. The resulting piano trio fantasia That Crazed Smile evokes a moonlit night where fairies join forces to shower star-crossed lovers with dreams. Bray creates Impressionist and Surrealist spaces,alternating between pointillist and planar structures. An elaborate, free-tonal fabric seems to unravel before our eyes, illuminated with flashes of lightning. Expressively heightened moods contrast with passages that are playful, almost dance-like, thus making us utterly forget that Bray is actually applying rigorous composition technique.

In their ongoing work as a trio, these three internationally established musicians share a special kind of symbiosis that draws its inspiration from their solo and chamber music activities, professorships and leading positions in orchestras. On the occasion of their début recital, the North German daily Flensburger Tageblatt praised the Oberon Trio for their immense interpretative accomplishment, which testifies to this new ensemble’s astounding maturity and evident stylistic mastery. Since then, the trio has guested at the Konzerthaus in Vienna, the Laeiszhalle in Hamburg and the Berlin Philharmonie, as well as in Italy, Bulgaria, the Ukraine, Israel, India and Egypt. During this time, the ensemble has received valuable counsel from members of the Alban Berg and Artemis Quartets. The trio has collaborated with performers and composers of the likes of Jörg Widmann, Shirley Brill, Benjamin Yusupov and Charlotte Bray. Certain large-scale projects initiated by the ensemble have been supported by institutions such as the Goethe Institut and Villa Musica. Featuring the world première of Jörg Widmann’s piano trio along with works by Haydn and Schumann, the Oberon Trio’s album Passacaglia was singled out as a weekly “CD tip” by classical music broadcasters HR, MDR and NDR. In the coming 2016-2017 season, the trio will collaborate in performances with Ian Bostridge and Tabea Zimmermann.