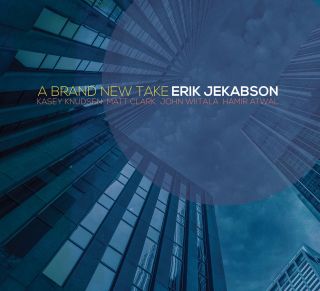 Catalog number: OA2 22136
Releasedate: 25-11-16
"...when trumpeter Erik Jekabson is the force responsible for the conflagration, it's an invitation to let the good times roll." - Andrew Gilbert, Berkeley Side.
Over the past decade, composer and trumpeter Erik Jekabson has been at the center of a daunting array of creatively charged musical situations that consistently attract the Bay Area's most incisive improvisers, like the cast that joins him here on his fifth album as a leader. The album’s surging post-bop opener “Streamlined,” introduces the quintet's front line with Jekabson and saxophonist Kasey Knudsen, propelled by crisp work from the fierce rhythm section featuring pianist Matt Clark,  John Wiitala on bass, and the extraordinary young drummer Hamir Atwal. Besides his work as a leader, Jekabson has contributed to many albums as a sideman, including projects by trombone legend Gracham Moncur III,  Marcus Shelby, New Orleans funksters Galactic, and singer/songwriter John Mayer, with whom he toured for a year. He also runs the Electric Squeezebox Orchestra whose debut recording was released in 2015.
Erik Jekabson is a freelance trumpet player, composer, arranger and educator who lives in the San Francisco Bay Area. He is equally busy playing and composing for different bands, leading his own groups and teaching a wide variety of students. Erik has four CDs out under his own name: his most recent album is "Erik Jekabson Quartet & John Santos: Live at the Hillside Club", (released in 2014) which like "Anti-Mass"(2012) , and "Crescent Boulevard" (2010) are on his own Jekab's Music record label. A fourth CD, "Intersection", was recorded in New York in 2002 and released on the Fresh Sound/New Talent label. Erik also co-produced and played on two other recordings which are widely available: "Vista: the Arrival" and "New World Funk Ensemble". He's recorded as a sideman on numerous other jazz recordings, as well as doing session work in many other genres of music and on movie and video game soundtracks. He's spent time on the road with Illinois Jacquet, John Mayer, Galactic, and the Howard Fishman Quartet, and has performed at such notable venues as the Concertgebouw in Amsterdam, the Algonquin Room, the New Jersey Performing Arts Center, Madison Square Garden, the Tonight Show with Jay Leno and Late Night with David Letterman. As an arranger and composer, he's written for both vocalists (Madeleine Peyroux, Ani DiFranco, Jackie Ryan, Kenny Washington, Madeline Eastman, Kellye Gray, Sandy Cressman, Raz Kennedy, Shanna Carlson) and instrumental ensembles (San Francisco Symphony, the Stanford Jazz Orchestra, the Realistic Orchestra, the California State University East Bay Jazz Ensemble, the SF Composers Orchestra and his own Electric Squeezebox Orchestra, which plays every Sunday at Doc's Lab in San Francisco.)

Erik currently leads his own ensembles in the Bay Area, and has brought them to the Stanford Jazz Workshop, the DeYoung Museum, the SFJazz Center, Kuumbwa Jazz, the Jazzschool, the Napa Valley Jazz Society's Parlor Series, Jazz at Pearl's, The Sound Room, Pacifica Performances, the Downtown Berkeley Jazz Festival, the Red Poppy Art House and the Piedmont Piano Company. He also works with local Bay Area musicians such as the Fred Randolph Quintet, Mario Guarneri's tbd, the Michael O'Neill Quintet featuring Kenny Washington and Manny Moka and the Band on Fire. Erik has a Bachelors Degree from the Oberlin Conservatory of Music and a Master's Degree from the San Francisco Conservatory of Music, and is currently the director of the Young Musician's Program at the Jazzschool, and serves on the board of Jazz in the Neighborhood. He is on the faculty at the California Jazz Conservatory, Los Medanos College and Diablo Valley College, and has given clinics at Santa Rosa Junior College, Cal State East Bay and Loyola College in New Orleans. He's a regular instructor at Jazzcamp West, the Stanford Jazz Workshop, the Lafayette Summer Jazz Workshop and the Brubeck Institute, and has written two books of jazz duets for trumpet.