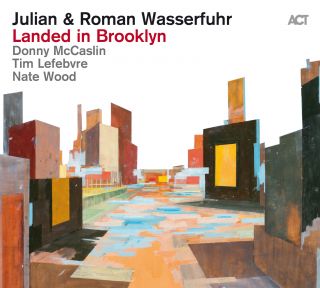 One thing which is really important for us as musicians is not to get stuck in a rut. We keep looking for the inspiration which will allow us to develop. When Siggi Loch called us up last year, and asked if we were interested in making another album for the ACT label, naturally we agreed – but we also admitted that we hadn‘t really given it much thought, and we certainly didn‘t have a unifying concept, which is something people seem to expect from an album these days.

So it was our good fortune when he threw a suggestion into the discussion: we should head off for New York, be inspired by the magic of the city, and of course by all the jazz to be found there. Plans started to fall into place quite swiftly. The bedrock of our studio band would be Tim Lefebvre on bass and Nate Wood on drums, both of whom agreed straight away to get involved. But the cherry on this particular cake was the opportunity to draft in Donny McCaslin. The myth really is true: musicians of genuine stature don‘t just play like a dream, they also have amazing presence and charisma, a factor which gave us an incredible lift on both of the days of our recording session. In the studio, we were able to switch both our brains and the outside world to silent, and to give our feelings free rein.

Were we going to produce important statements? Or was it just going to be a joyful conversation? Somehow it didn‘t really matter, because, in the moment, everything felt so completely honest and right. These sessions were all about music - and energy. We found ourselves in a New York state of mind that was authentic, uncontrived and natural. It was a great place to have landed.

Already as a teenager, Julian Wasserfuhr was considered the greatest German trumpet talent since Till Brönner. Together with his brother Roman on the piano they form an inseparable team. Their (spiritual) kinship enhances the way they played together. The closeness of the two brothers lends their music an easily flowing and relaxed character. Whether with the trumpet or flugelhorn, Julian is not one of those musicians who constantly strives to go higher, faster, further. With his warm sound he creates the atmospheric space for the music. His brother Roman, with his accentuated radiant piano, makes no less a contribution to the band's fresh and yet mature and airy sound. Their highly lauded debut "Remember Chet", which they recorded as teenagers, launched the two musicians into the German jazz stratosphere. It didn't take long before there were playing with greats such as Nils Landgren, Lars Danielsson and Wolfgang Haffner, all the while developing their style more and more into their own characteristic, melodic-atmospheric "Wasserfuhr Sound": "I like the courage these two have to keep things simple. You have to be brave to do that. The admirable thing about it is that it is the opposite of show-off jazz," summarises actor Matthias Brandt.