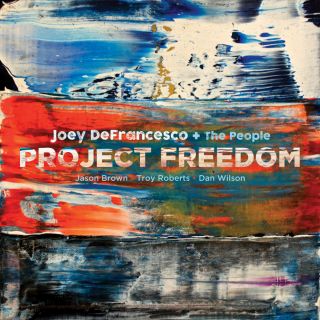 - not only is Joey DeFrancesco a big star on the Hammond B3 organ, he is also a world traveller, storyteller, quartet leader, freedom fighter, peace maker, spiritual healer, genre-busting composer and a cover artist

When jazz aficionados think of Joey DeFrancesco--and they often do--they ponder his matchless talents as a modern-day avatar of the Hammond B3 organ and the Philadelphia history he shares with his principle instrument. Organ-based blues and jazz started in Philly and DeFrancesco is the first to tell you so.  So for Joey DeFrancesco's upcoming album, Project Freedom--his debut for the Mack Avenue Records label--DeFrancesco adds several feathers to his cap including those of world traveling storyteller, quartet leader, freedom fighter, peace maker, spiritual healer and genre-busting composer and cover artist. "All of my albums mean a lot to me," he says. "Project Freedom though - this one means just a little bit more."

Joey DeFrancesco’s emergence in the 1980s marked the onset of a musical renaissance. Organ jazz had all but gone into hibernation from the mid-‘70s to the mid-‘80s until DeFrancesco reignited the flame with his vintage Hammond organ and Leslie speaker cabinet. The son of “Papa” John DeFrancesco, an organist himself, the younger DeFrancesco remembers playing as early as four-years-old. Soon after, his father began bringing him to gigs in Philadelphia, where he was proudly born and raised, with legendary players like Hank Mobley and Philly Joe Jones, who quickly recognized his talent and enthusiasm. With a natural gift for music, DeFrancesco also swiftly picked up on the trumpet after a touring stint with Miles Davis as one of the two youngest players ever recruited for any of Davis' ensembles.

DeFrancesco has recorded and/or toured with his own groups as well as numerous renowned artists that include Ray Charles, Diana Krall, Nancy Wilson, George Benson, James Moody, John Scofield, Bobby Hutcherson, Jimmy Cobb, John McLaughlin, Larry Coryell, David Sanborn and many more. The three time Grammy® Award-nominee, with more than 30 recordings as a leader under his belt, has received countless Jazz Journalist Association awards and other accolades worldwide, including being inducted into the inaugural Hammond Organ Hall of Fame in 2014, the Philadelphia Music Walk of Fame in 2016 as well as topping the Critics Polls in DownBeat Magazine eleven times over the past fifteen years and the Readers Polls every year since 2005. DeFrancesco also hosts a weekly program on SiriusXM Radio’s Real Jazz channel titled “Organized.”