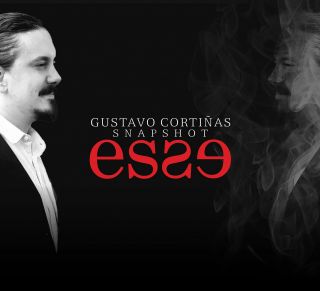 Catalog number: OA2 22138
Releasedate: 10-02-17
- fusing two of his loves - music and philosophy
Fusing two of his loves - music and philosophy - drummer Gustavo Cortiñas gathers fellow musicians from his adopted home of Chicago to contemplate, through composition and improvisation, the relationship between essence and being. Inspired by the ongoing dialogue of some of the most brilliant minds in western philosophy, Gustavo composed music to illustrate their concepts of 'being' and the effect those thoughts had on the formation of metaphysical, ethical, and moral theories. Born and raised in Mexico City, Cortiñas graduated with honors from New Orleans' Loyola University and moved to Chicago in 2011 to pursue his Masters at Northwestern University. "A Smörgåsbord of the moods and nuances that make up the human experience... intrinsically fusing the personal to the universal..." Jazziz Magazine.
​A graduate of Loyola University New Orleans (BM Jazz, Minor in Philosophy, Magna Cum Laude, 2011), and Northwestern University (MM Jazz, June, 2013), Gustavo Cortiñas has developed a successful career in the US for close to a decade, leading and accompanying ensembles in renowned stages and festivals in North America, Latin America, Asia, and Europe. “In his playing stands out the dynamic rhythm section interaction, swing, and keen focus on melodic development, which together with his familiarity with the jazz tradition and the musical traditions of his native Mexico and Latin-America, offer a new and fresh sound" (Cristina Zenteno, El Heraldo de Chiapas).

​Born and raised in Mexico City, son of Leon Cortiñas and Gabriela Fouilloux, Gustavo started drumming at the age of 10, studying under Santiago Fortson. In 2004 he enrolled in Centro de Investigacion y Estudios de la Música, where he studied music and drums under Rodrigo Jimenez. Subsequently, he studied privately in Mexico City with Hernán Hecht, who mentored him until his departure from the country.

​In 2007, sponsored by Loyola University, he moved to New Orleans to pursue a BM Degree in Jazz Studies, and a minor in philosophy, graduating Magna Cum Laude in 2011. In New Orleans he embraced the opportunity to learn the jazz tradition in the birthplace of jazz, studying and playing with some of the city’s finest musicians, such as jazz icons Wayne Maureau, Johnny Vidacovich, John Mahoney, and Tony Dagradi. Interactions with many other talented players on the local scene led to his long-standing musical partnership with saxophonist Roy McGrath, with whom he has been playing since 2009. He was also featured on McGrath's debut record "Long Shot" (New Orleans, 2010) and his sophomore recording “Martha" (Chicago, 2014). Another product of his musical ventures in New Orleans was the birth of the Collective Vision Sextet, which released a record in 2010, and Adam Rosado Big Band which will be realizing its first record later in 2016. In 2010 Cortiñas was awarded the Gerry and Franca Mulligan Foundation Scholarship for his outstanding development and achievement in jazz at Loyola University.

​In the fall of 2011, sponsored by the Rev. John M. Krump Endowed Scholarship, Cortiñas moved to Chicago to pursue a Master of Music in Jazz Studies degree at Northwestern University, studying under Willie Jones III and Victor Goines. Proximity to a network of gifted musicians in the Chicago area gave him the opportunity to lead his own groups and to support, as a sideman, some of the city’s great artists.

​Cortiñas graduated from Northwestern in the spring of 2013 with a Master of Music degree. A month later he released his debut record “Snapshot" which earned him critical acclaim internationally. Jazziz magazine called Snapshot "A Smörgåsbord of the moods and nuances that make up the human experience... an idiosyncratic album that intrinsically fuses the personal to the universal".

Since then he has been performing regularly in Chicago, and touring throughout the USA, Latin America, Europe and Asia. He has become one of the in demand drummers of this musical city, performing regularly with his own band "Snapshot", as well as with the Roy McGrath Quartet, Hans Luchs Trio, Adreian Davis, Subhi, Alyssa Allgood, Adam Thornburg Quintet, Kitt Lyles Real Talk, Yuyo Verde, the Four Star Brass Band, amongst others, and leading a weekly jam session in Logan Square's Moe's Tavern.

Gustavo has an increasing extensive discography as a leader and as a sideman, tracking with bands from diverse genres from rock and pop, to jazz and world music.  "ESSE", his second release as a leader, and first release with Origin, fuses his two passions: music and philosophy