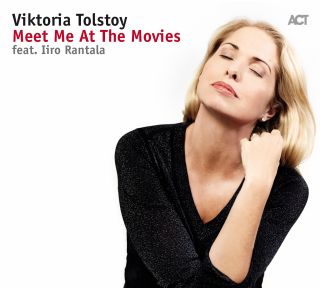 Meet Me At The Movies (vinyl)

Catalog number: ACTLP 98271
Releasedate: 27-01-17
- 11 soundtracks sung by Viktoria Tolstoy
- a journey through the history of film and of film music, with music from Fame, Dracula, Casablanca and Dancer In The Dark

Viktoria Tolstoy’s voice has an intriguing, bittersweet, melting quality. And there’s her unique way of lingering tantalizingly between drama and melodrama. And there’s the way she simultaneously reveals both her Swedish heart and her Russian soul. But there’s something more: it’s her vivid way of scene-setting, the pictorial clarity she brings when she sings. Perhaps it is not that surprising: “I’ve been a massive film fan all my life,” she admits. “With the children around these days, I don’t get to the movies quite so often. So I really enjoy it when I can get to watch films on Netflix or HBO in a hotel on tour.”

And so, three years on from recording “A Moment Of Now”, which placed the singer in the intimate setting of a duo with pianist Jacob Karlzon, she now directs her attention to music from films. “Meet Me At The Movies” is an emotional journey through the history of film and of film music. The singer's route takes her from Herman Hupfeld's “As Time Goes By” from the Michael Curtiz film “Casablanca” through to Björk's “New World” from Lars von Trier's “Dancer In The Dark.” It goes from “Smile” from Charlie Chaplin's “Modern Times” to Seal's “Kiss From A Rose“ from “Batman Forever”. And it also takes in Michael & Lesley Gore's “Out Here On My Own” from “Fame” and Sarah McLachlan's “Angel” from “City of Angels” starring Nicolas Cage.

Tolstoy's original plans for this album included an orchestra. “I just love the big score”, she says. “All the strings, that music which brings the tears welling up. In Hollywood they are so brilliant at dropping in exactly the right sounds to grab the emotions, it's all worked out to the last fraction of a second, and it’s impossible to resist.” But in the end she chose the exact opposite for her core band for this project. She went for the fleet-footed sensitivity of a guitar trio, with bassist Mattias Svensson, drummer Rasmus Kihlberg, and Krister Jonsson playing guitars.

All three of these musicians have several years' experience of working with Tolstoy, so they are played-in, attuned to her artistry, and the mutual trust level is high.

The same goes for the producer of the album, that most successful of all jazz exports from Sweden, Nils Landgren. As is only natural, Landgren also features as trombonist on two tracks, and sings with Tolstoy in a duet on “Love Song For A Vampire”. At the suggestion of executive producer Siggi Loch, another guest stepped into the fray as well. Pianist Iiro Rantala is a musician who has given endless proof over time of his quite astonishing ability to transform well-known material in a way that is out of the ordinary and completely personal. His album of John Lennon songs were a huge critical and popular success and carried away several awards. On this album he gives his very individual and refined takes on seven songs from the movies. The way Tolstoy has expressed her thanks to the pianist is telling: “Quite a few times Iiro brought back Esbjörn [Svensson] to mind. I am just so happy with what has emerged from our work together.”

“Meet Me At The Movies” says Tolstoy, “is definitely one of those cases where less is more. I was far freer to interpret these well-known songs with this group than I would have been working with an orchestra. This band made it possible for me to have my own sound,” she says. What she means by this can be heard on “As Time Goes By.” The song has been covered literally thousands of times, but here it has clean Scandinavian lines, and Tolstoy’s voice gives it a fragility that can never have been heard before. Most of the transformations were, like this one, developed during the sessions in the studio. “For some of the songs I already had a fairly clear idea of what I wanted to do in my head,” Tolstoy explains. For example I wanted “Calling You” from “Bagdad Café” to be completely exposed, with just bass at the beginning.”

This is a selection of songs from films born of a passion. “I know every one of the films that these songs come from,” says Tolstoy. “And just about all of them are among my favourite films. Both “Bagdad Café ” and “Dancer In The Dark” are at the top of my list - in each case I have a special connection to the music.” That closeness can be heard. She gives each song a personal resonance and its own character. When Viktoria Tolstoy invites you to meet her at the movies, the emotions will run high…. and it will be a pleasure and a privilege to accept

The Swedish singer Viktoria Tolstoy was born in the small town of Sigtuna, near Stockholm, in 1974, but she has Russian blood in her veins. Her great-grandfather, the son of the world-famous writer Leo Tolstoy, grew up in Tsarist Russia. He suffered from a nervous illness, sought medical help from a famous Swedish specialist, fell in love with the specialist’s daughter, married her and settled in Sweden at the end of the 19th century. Since then the ancestors of Viktoria, the great-great-granddaughter of the legendary novelist, have lived in Sweden.

Viktoria’s childhood and adolescence were spent in Uppsala. Her father, a Swedish jazz musician, took his daughter’s musical education into his own hands, and introduced her to the world of jazz. In the mid 1990’s, while performing at a Stockholm club, she was discovered by a record company and offered a recording contract. Her debut album Smile, Love and Spice – for which her father wrote several of the tracks – immediately attracted the attention of the circle of leading Swedish jazz musicians, such as Arne Domnerus, Putte Wickman and Svante Thuresson.

Less than two years later, her strongly pop-oriented album För Älskad – Too Loved hurled her to the top of the charts, and made her a star at home almost overnight.

In 1997, the then only 22 year-old Tolstoy recorded the phenomenal White Russians. The melodious pop jazz on this album established her place in the charts as a star in Sweden. She had written the music together with her compatriot Esbjörn Svensson (who was also the producer of the album) and they performed together with his trio e.s.t. Soon afterwards Viktoria Tolstoy accompanied e.s.t. on their first German tour.

Next, Viktoria performed worldwide with jazz greats such as Ray Brown and McCoy Tyner and concentrated mainly on developing her career in Sweden. In 2000 she released a selection of jazz standards with her quartet, which were published under the title Blame It On My Youth.

Nils Landgren had already featured her as a guest on his Funk Unit album 5000 Miles (ACT 9271-2) in 1999, and three years later Tolstoy could again be heard on his ballads album Sentimental Journey (ACT 9409-2). Since the end of 2003 she has been exclusively signed to ACT. In February 2004 she released her ACT debut album Shining on You (ACT 9701-2). Within a week it reached number 2 in the Swedish jazz charts and number 26 in the pop charts.

The songs – “incredibly beautiful and intimate melodies” (FonoForum) – again all originated from the pen of Esbjörn Svensson. Nils Landgren produced this successful album, which in the same year received a German Jazz Award. The press raved about her voice “as clear as glass, simply wonderful” (taz), “unpretentiously natural, with a light, smoky timbre” (Hamburger Abendblatt) and praised her as a “master of ‘less is often more’” (FonoForum).

Tolstoy toured for a whole year all over Europe with her own show, supported the Nils Landgren Funk Unit with two songs on the album Funky ABBA (ACT 9430-2) including the incredible “When all is said and done” with none other than Benny Andersson himself on the piano, and accompanied the band on the Funky ABBA tour of China.

In April 2005 Tolstoy released her second album on ACT: My Swedish Heart (ACT 9705-2). It’s an expression of love and a tribute to 50 years of “Jazz made in Sweden”. The selection of songs ranges from compositions by Jan Johansson or Lars Gullin and freshly treated traditionals - among them the folksong “Jag Vet en Dejlig Rosa” that was made famous by Monica Zetterlund’s 1964 recording with the Bill Evans Trio - to compositions by Viktorias friends and colleagues Esbjörn Svensson, Lars Danielsson, Anders Jormin and Jacob Karlzon. The Süddeutsche Zeitung called the album - which reached number 1 in the Swedish and number 2 in the German jazz charts, and was a huge success on extended tours of Europe and Canada - an „elegant balancing act between Scandinavian folk and jazz“.

Her third ACT-album Pictures Of Me (ACT 9712-2), released in October 2006, is another example of her versatility, and it is full of surprising and personal interpretations of famous (and less famous) pop songs by Paul Simon, Prince, Peter Gabriel, Stevie Wonder, a.o. Viktoria Tolstoy, her long time piano player Jacob Karlzon and her current producer, the wonderful bass player and cellist Lars Danielsson have found wonderful arrangements for their convincing adaptations. With Pictures of Me, Tolstoy entered the Swedish album chart at #27.

For many years now, Viktoria Tolstoy has been keen to explore her Russian musical roots.Together with ACT colleague Nils Landgren, producer already on her first two albums, Tolstoy finally dared to attempt this undertaking and managed to make a modern kaleidoscope of Russian music by bringing out My Russian Soul (ACT 9721-2, release date: October 2008). It was created with the incorruptible perspective of an artist, who gets to the bottom of her musical visions as well as her soul.

The ACT Signature Edition, released in April 2011, gives an impressive overview of Viktoria Tolstoy’s artistic career to date: two CDs with a total of 24 tracks document her path as one of the most defining and successful artists of European jazz.

Her album Letters to Herbie, released in September 2011, is dedicated to one of Viktoria Tolstoy’s greatest inspirations: the music of American pianist and composer Herbie Hancock. Its soulful grooving songs, particularly from the 80s, gives Viktoria Tolstoy, together with producer Nils Landgren, a totally new and unmistakable sound between jazz, soul and pop.

With A Moment Of Now (Release: November 2013) Viktoria Tolstoy and Pianist Jacob Karlzon create 14 fascinating and magical moments that will remain in the listeners ears for long. In an intimate duo setting the two change the fundamental character of carefully selected songs from Jazz, Pop and Rock.