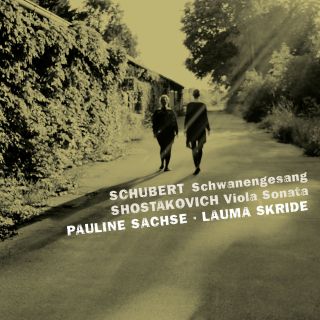 According to a Greek myth, the voices of swans have an otherworldly beauty, and their song is a foreboding of death. Such ethereal beauty emerges in moments which are to be treasured and preserved wtih care. The two works on this release stem from two outstanding composers who, at the end of their lives and in thoroughly different contexts, produced creations of lasting value. Schubert's life came to an end at age 31, barely eighteen months after the death of Beethoven, whom he secretly revered as a model. He learned of Beethoven's death when he had just finished composing Winterreise, a cycle of chilling songs', as he described them. Schubert's friends later partially blamed the grim content of Winterreise for his early demise. Shostakovich wrote his Sonata for Viola and Piano within an extremely brief period of time. On June, 25 1975, Fyodor Druzhinin - the violist of the Beethoven Quartet, who were the composer's friends - received a telephone call from the Shostakovich, informing him that he was working on a viola sonata and wanted to clear up initial technical matters with him. Shostakovich's health had always been quite poor; by this time, after having suffered two heart attacks and a muscle disease, he was additionally weakened by years of fighting lung cancer. Shostakovich finished his score on July 5tha nd passed away on August 9th. Fyodor Druzhinin and Mikhail Muntyan premiered the work only a few weeks later on September 25th. The composer therefore never had the opportunity to hear what his work sounded like. Shostakovich's political outlook and his ambiguous attitude vis-à-vis the political system of the USSR have been much discussed; his music, however, remains clear and honest. He exposed the grotesque masks and masquerades of human society. In his compositions he chronicled his day and age, a period characterized by hypocrisy, fear, treason, unimaginable human vileness and an excessive cultivation of image on the part of those in power. Hi smusic is thus now as urgently appropriate as it ever was.' (Pauline Sachse)

The search for truthful expression, along with the endeavour to forge a poetic narrative of sound – these are the cornerstones of violist Pauline Sachse’s ongoing artistic pursuit.
In 2013 she was appointed viola professor at the Carl Maria von Weber School of Music in Dresden. At that point she left her previous solo position at Berlin Radio Symphony Orchestra and resigned as guest professor from the Berlin Hanns Eisler School of Music in order to devote herself fully to her new teaching duties while maintaining her activities as solo and chamber musician.

Born in Hamburg, Pauline Sachse was trained as a violist at the Hanns Eisler School of Music, at the Berlin University of the Arts, and at Yale University, under the tutelage of Jesse Levine, Wilfried Strehle and – for many years – Tabea Zimmermann, whose assistant she became at the Hanns Eisler School of Music in 2007. She gained further significant insight from studies with the Alban Berg Quartet.

In ensembles such as the Mahler Chamber Orchestra, Lucerne Festival Orchestra, the Bavarian Radio Symphony and the Berlin Philharmonic, she worked with renowned conductors, including Claudio Abbado, Daniel Barenboim, Mariss Jansons, Simon Rattle, and Seiji Ozawa.
Pauline Sachse combines a variety of artforms in her artistic and educational approach, including classical dance ever since her youth. Today she forms her thoughts not only in sound, but also sculpts them in words and in stone. She makes sculptures, performs interdisciplinary artistic experiments, and publishes articles in her ongoing quest for truthful expression. On the podium, Pauline Sachse’s instrumental partner is the Madame Butterfly viola made by Paolo Maggini in Brescia in 1610.www.paulinesachse.com

Lauma Skride's playing is wonderfully sensitive, with marvelous tone quality, and always with highly virtuosic vigour, according to a review by the Bavarian Broadcasting Service. Combined with brilliant technique, these are the qualities with which Lauma Skride captivates audiences on major concert stages throughout the world, both as a soloist and chamber musician.

Lauma Skride, who was awarded the Beethoven Ring in 2008, is highly acclaimed for her interpretations of Germanic classical and romantic repertoire. She has appeared with various orchestras such as Frankfurt Radio Symphony Orchestra, Hamburg & Dresden Philharmonic, and the Orquesta de Gran Canaria. Lauma Skride performs with conductors such as Andris Nelsons, Kristjan Järvi, Anu Tali, Muhai Tang, Peter Ruzicka, John Storgårds, Pedro Halffter.

Lauma Skride is also committed to the long established duo with her sister Baiba Skride.
Lauma loves chamber music and performs with the cellists Daniel Müller-Schott, Sol Gabetta and Julian Steckel, as well as with Jörg Widmann, Christian Tetzlaff and the Armida Quartett.
She has been awarded an ECHO Classic Award in 2007 as Best Young Artist.
Recently in 2015 thee sisters released a CD with a pure Scandinavian repertoire.
Born in 1982 in Riga, Latvia, Lauma Skride is the youngest of three daughters in a musical family. She began playing the piano at the age of five and was later a pupil of Anita Paze at the Emil Darzin School of Music in Riga. She then studied under Volker Banfield at the University of Music and Theatre in Hamburg. Lauma Skride has participated in numerous international competitions since the age of eleven, among them the Maria Canals Competition in Spain and the Cleveland International Piano Competition in the USA, and has won several prizes.