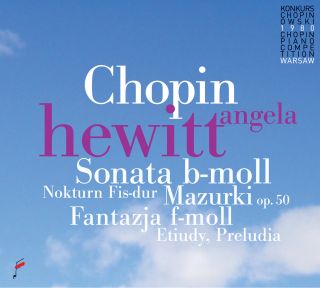 Catalog number: NIFCCD 631
Releasedate: 10-03-17
- A world premiere release of Angela Hewitt performances at Chopin Competition in 1980
- As a 22 years old pianist, she already shows the sensitivity and intellgence qualities that paved her following career
- This is only Hewitt's Chopin second disc to appear on the market, the first being a Hyperion dated 2003.
- She was awarded an OBE in the Queen’s Birthday Honours in 2006


Angela Hewitt, not only a great interpreter of Bach’s music.
Angela Hewitt numbers among the most distinguished pianists of our time. She specializes in the music of J. S. Bach, but few remember that already in 1980 at the Chopin Competition, she revealed her uncommon talent and, though she did not win a prize, she certainly did figure among the most interesting artistic personalities. Unfortunately, almost ‘[n]o one at the time, among the jury, the critics or the audience, stood up for this brilliant pianist. […] One thing, however, is certain: her competition performances of Chopin’s works, despite the technical glitches, are impressive for their maturity and their individual stamp. The 22-year-old Angela Hewitt has a perfect grasp of the sense of Chopin’s rubato, creates subtle phrasing and employs a refined, rounded sound, although perhaps of limited amplitude (one would like to say “womanly”).’*
Her competition recordings are being brought back by The Fryderyk Chopin Institute in its Blue Series, which reminds listeners of the most interesting performances of the Fryderyk Chopin International Piano Competition.

Pianist Angela Hewitt has established herself at the highest level, not least through her superb, award-winning recordings for Hyperion. Completed in 2005, her eleven-year project to record all the major keyboard works of Bach has been described as “one of the record glories of our age” (The Sunday Times) and has won her a huge following. She has been hailed as “the pre-eminent Bach pianist of our time” (The Guardian) and “nothing less than the pianist who will define Bach performance on the piano for years to come” (Stereophile). She has a vast repertoire ranging from Couperin to the contemporary. Her discography also includes CDs of Granados, Beethoven, Schumann, Rameau, Chabrier, Olivier Messiaen, the complete solo works of Ravel, the complete Chopin Nocturnes and Impromptus, a Handel/Haydn album, and three discs devoted to the music of Couperin. Her recordings of the complete solo keyboard concertos of J.S. Bach with the Australian Chamber Orchestra entered the billboard charts in the U.S.A. only weeks after their release, and were named Record of the Month in Gramophone magazine. Future releases include the works of Robert Schumann for piano and orchestra with the Deutsche-Sinfonie-Orchester and conductor Hannu Lintu, solo works of Debussy, the Bach Flute Sonatas with Andrea Oliva, and a cycle of Mozart PIano Concertos.