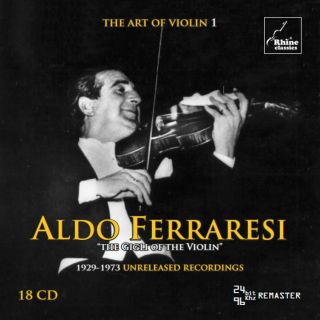 The Art of Violin 1

Catalog number: RH 001
Releasedate: 10-03-17
- Aldo Ferraresi is a great, almost unknown violinist, whose recording heritage is here presented for the first time
- These recordings mostly span a period of time that goes from 1960 to 1973
- Among the conductors featured: Aram Khachaturian, William Walton, Carlo Zecchi, Mario Rossi.
- The repertoire is mostly romantic, but includes Mozart on one side and some newest Concertos as Shostakovich's Khachaturian's, Benjamin's.

Bold technique, sentimental audacity and attachment to the family were the guiding points of Aldo Ferraresi’s life. Nazifascism and war heavily weighed on the Ferraresi family, especially because of the fact that the mother was of Jewish origin. However, the storm passed. From the Teatro alla Scala in Milan to the Royal Festival Hall in London, Ferraresi performed around the world in Spain, Germany, Switzerland, Russia, Portugal,

Aldo Ferraresi incomparable technical and musical skills leaps out from these recordings, together with the fluency of his phrasing and his beautiful legato, heritage of his Ysaÿe apprenticeship days. The whole Ferraresi recorded legacy presented here has been duly restored and remastered for a better listening experience, also if some noises and applause have been kept to maintain the atmosphere of the live concerts and of the original recordings.

Ferraresi was born in Ferrara, the son of Augusto Ferraresi (1868-1939), an artillery marshal and mandolin player, and Marcella Jesi. His mother was "of Jewish origin".

At the age of five he began his studies at the Frescobaldi Institute of Music in Ferrara with Federico Barera and Umberto Supino. When he was 12, he was admitted to the Parma Conservatory. His teacher there, Mario Corti, also accompanied him to Rome where he received a degree in violin from the Accademia di Santa Cecilia three years later. Upon suggestions from Jan Kubelik, he went to Eugène Ysaÿe, who considered him one of his best pupils.

Starting from 1923 he was leader of "Aldo Ferraresi Chamber Orchestra" where, together with Marcello Cortopassi and professors of the "Rome Augusteo Orchestra", he played at Gran Caffé Margherita in Viareggio (Lucca).

He went on to perform in concert halls throughout Europe and the United States including La Scala in Milan, the Royal Festival Hall in London. In addition to his solo concert work, he was also first violin in the Quartet of San Remo and concertmaster at the Symphonic Orchestra of San Remo, as well at the Teatro San Carlo in Naples.