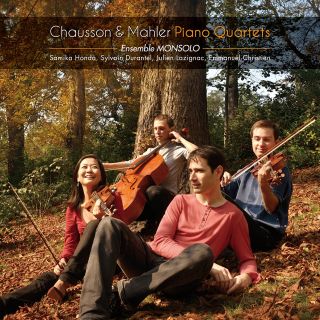 Catalog number: KKC 037
Releasedate: 10-03-17
- Two rare and beautiful chamber works, written at the end of XIXth century
Over the last ten years, the reputation of Ernest Chausson (January 20, 1855 – June 10, 1899) has grown ever greater: his growing band of interpreters have been struck first and foremost by the authenticity of his musical voice. And while Chausson excites us as a composer through the lofty aesthetic demands of his music, he also cuts an attractive figure as a man: decent, generous and immensely learned.
One of Chausson’s masterpieces, the Quartet (Op. 30) began to take shape in September 1897. Cyclical in form, the Quartet is a bright and energetic work, with charm and beauty.

Gustav Mahler (7 July 1860 - 18 May 1911) entered the Vienna Conservatory at the age of 15, taking classes in counterpoint and composition. One year later, he composed the Piano Quartet in A minor, which remains his only surviving work of chamber music. It holds a special significance, the bulk of the music from Mahler's youth having since been lost or destroyed. It was given its first public performance on 10 July 1876, with the composer at the piano, but appears to have been lost at some point thereafter.
A manuscript was rediscovered by Mahler's wife, Alma, in the early 1960s.


The Ensemble Monsolo began life in 2005 as a string quintet with double bass, while its members were still studying at the Paris Conservatory (Conservatoire National Supérieur de Paris (CNSM)). Monsolo has had the opportunity to study under eminent musicians such as Jens McManama, Jean Mouillère, Michel Strauss, Alain Meunier, Claire Désert, the Maggini Quartet, and recently has been receiving advice from the Ysäye Quartet, as well as within the ProQuartet program with Walter Levine and Paul Katz.

The Ensemble Monsolo has performed naturally in France, but also in Spain, Italy, England, the United Sates and in Japan, having the great honour to play with renowned musicians such as Alain Meunier, Agnès Vesterman (cellists), Julien Petit (saxophonist), and Daria Hovora, Delphine Bardin, Daria Fadeeva and François-Joël Thiollier (pianists).

It is with François-Joël Thiollier that Monsolo recorded for the Polymnie label two quintets by Georges Onslow, released in 2009, that was awarded the 5 Diapasons and high critics. Monsolo also recorded the original soundtrack of Safy Nebbou’s movie “Mark of an Angel” (2008).

Monsolo received the interpretation prize at the International Chamber Music Competition in Illzach 2007 (France), as well as the First Prize at the Forum Musical de Normandie 2007 (France), and the First Prize of the Torneo Internazionale di Musica 2008 in Verona (Italy). Following these awards, Monsolo was selected for the Declic programme of Culturesfrance and Radio France. Monsolo’s performances for Radio France include the Cabaret Classique with Jean-François Zygel, and Dans la Cour des grands with Gaëlle le Gallic. Now, Monsolo has become an ensemble with a varied combination of instruments, grouping from two to ten musicians on stage.

Collaboration with composers of the present day is an important part of Monsolo’s activity. Composers such as Pierre Agut, Alain Weber, Maxime Tortelier and Dominique Preschez have dedicated their works to Monsolo. Ensemble Monsolo also gave the world premier of Jacques Boisgallais’s Quintet for 2 violas in Tokyo in 2009.
Since 2011, Ensemble Monsolo has been mainly touring in string trio and piano quartet formations, broadening its repertoire.