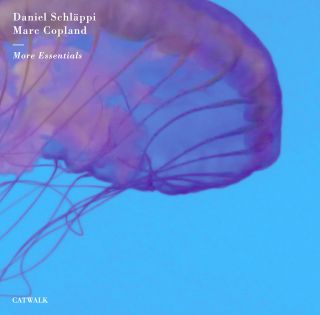 - After the first ''Essential'' album, here is the second
- improvisations by Daniel Schläppi

Silence. First there is silence. Then there are delicate basslines, playfully plucked on the upright bass. Silence once more, before the piano begins a floating melody. It is with minimalist, almost somnam-bulistic notes that “More Essentials” begins, the second release from Swiss bass player Daniel Schlappi and American pianist Marc Copland. After their first collective album “Essential” and four joint tours, on “More Essentials” the two musicians now continue their dialogue initiated in 2010. It is evident that two souls have met who have a lot to tell each other and other people. For this album the two musicians chose amongst others songs by Charlie Parker, Horace Silver, Joni Mitchell and Miles Davis. “We didn’t follow any set criteria to choose the songs,” according to Daniel Schlappi. “This is the music which has been accompanying us for a long time and which offers us the ideal scope for our play.” Marc Copland contributes the composition “L

Daniel Schläppi (1968) met Marc Copland in 2010 while he was in New York on an art scholarship. In 2005 he fonded together with Tomas Sauter the label CATWALK, on which thirteen titles have been released so far. He initiated the festival „BeJazzSommer“ in Bern. As his second passion Daniel Schläppi studies and teaches history at the University of Bern.