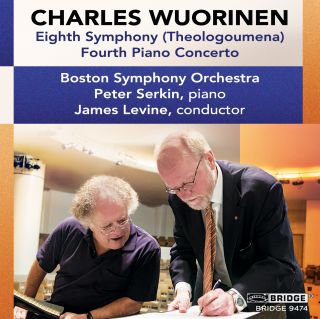 Catalog number: BRIDG 9474
Releasedate: 07-04-17
- An all-star lineup for Wuorinen Piano Concerto and Symphony no.8
- Boston Symphony Orchestra conducted by James Levine. At the piano: Peter Serkin.
- These spectacular recordings document the premiere performances of both of these works.

In 2004, James Levine became Music Director of the Boston Symphony Orchestra. Levine immediately began to commission major new works from leading American composers, including the two works recorded here. Wuorinen's Fourth Piano Concerto, written for the BSO, James Levine, and longtime Wuorinen collaborator Peter Serkin, was one of the first of the BSO commissions Levine conducted with the orchestra, in 2005. This was followed two years later by the Eighth Symphony (Theologoumena), a BSO 125th anniversary commission premiered under Levine's direction in 2007. These spectacular recordings document the premiere performances of both of these works.

Today the BSO reaches millions of listeners, not only through its concert performances in Boston and at Tanglewood, but also via the internet, radio, television, educational programs, recordings, and tours.
It commissions works from today's most important composers; its summer season at Tanglewood is among the world's most important music festivals; it helps develop future audiences through BSO Youth Concerts and educational outreach programs involving the entire Boston community; and, during the Tanglewood season, it operates the Tanglewood Music Center, one of the world's most important training grounds for young professional-caliber musicians. The Boston Symphony Chamber Players, made up of BSO principals, are known worldwide, and the Boston Pops Orchestra sets an international standard for performances of lighter music.

Launched in 1996, the BSO's website, bso.org, is the largest and most-visited orchestral website in the United States, receiving approximately 7 million visitors annually on its full site as well as its smart phone-/mobile device-friendly web format. The BSO is also on Facebook and Twitter, and video content from the BSO is available on YouTube. An expansion of the BSO's educational activities has also played a key role in strengthening the orchestra's commitment to, and presence within, its surrounding communities. Through its Education and Community Engagement programs, the BSO provides individuals of all backgrounds the opportunity to develop and build relationships with the BSO and orchestral music. In addition, the BSO offers a variety of free educational programs at Symphony Hall and Tanglewood, as well as special initiatives aimed at attracting young audience members.

The Boston Symphony Orchestra gave its inaugural concert on October 22, 1881, under Georg Henschel, who remained as conductor until 1884. For nearly twenty years, BSO concerts were held in the old Boston Music Hall; Symphony Hall, one of the world's most revered concert halls, opened on October 15, 1900. Henschel was succeeded by the German-born and -trained conductors Wilhelm Gericke, Arthur Nikisch, Emil Paur, and Max Fiedler, culminating in the appointment of the legendary Karl Muck, who served two tenures, 1906-08 and 1912-18. In 1915 the orchestra made its first transcontinental trip, playing thirteen concerts at the Panama- Pacific International Exposition in San Francisco. Henri Rabaud, engaged as conductor in 1918, was succeeded a year later by Pierre Monteux. These appointments marked the beginning of a French tradition maintained, even during the Russian-born Serge Koussevitzky's tenure (1924-49), with the employment of many French-trained musicians.

It was in 1936 that Koussevitzky led the orchestra's first concerts in the Berkshires; he and the players took up annual summer residence at Tanglewood a year later. Koussevitzky passionately shared Major Higginson's dream of "a good honest school for musicians," and in 1940 that dream was realized with the founding of the Berkshire Music Center (now called the Tanglewood Music Center).

Bernard Haitink, named principal guest conductor in 1995 and Conductor Emeritus in 2004, has led the BSO in Boston, New York, at Tanglewood, and on tour in Europe, as well as recording with the orchestra. Previous principal guest conductors of the orchestra included Michael Tilson Thomas, from 1972 to 1974, and the late Sir Colin Davis, from 1972 to 1984. Three BSO music directors of the past: Pierre Monteux (music director, 1919-24), Serge Koussevitzky (1924-49), and Charles Munch (1949-62) BSO Archives Major Henry Lee Higginson, founder of the Boston Symphony Orchestra BSO Archives WeekON 1617.indd 12 9/20/16 12:04 PM opening night a brief history of the bso 13 The first American-born conductor to hold the position, James Levine was the BSO's music director from 2004 to 2011. Levine led the orchestra in wide-ranging programs that included works newly commissioned for the orchestra's 125th anniversary, particularly from significant American composers; issued a number of live concert performances on the orchestra's own label, BSO Classics; taught at the Tanglewood Music Center; and in 2007 led the BSO in an acclaimed tour of European music festivals. In May 2013, a new chapter in the history of the Boston Symphony Orchestra was initiated when the internationally acclaimed young Latvian conductor Andris Nelsons was announced as the BSO's next music director, a position he took up in the 2014-15 season, following a year as music director designate.

Today, the Boston Symphony Orchestra continues to fulfill and expand upon the vision of its founder Henry Lee Higginson, not only through its concert performances, educational offerings, and internet presence, but also through its expanding use of virtual and electronic media in a manner reflecting the BSO's continuing awareness of today's modern, ever-changing, 21st-century world.