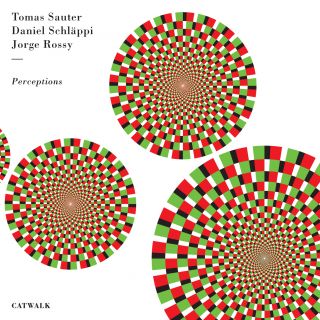 - Sauter and Schläppi have played innumerable concerts together as a duo, and brought out two CDs, Indian Summer (2006) and First Day in Spring (2011), which were highly acclaimed by both public and experts.

- In trio with Jorge Rossy, the result of this long-term relationship can still be heard and gains a further dimension in its union with the brilliant drummer.

A wonderful album, with some masterworks ... World class made in Switzerland Weltwoche CH, Highlight in chamber jazz ... manifesting the European jazz Westzeit D

With such and many other compliments, the culture media have considered the first album of the famous trio that appeared on the label CATWALK in 2011. It was the first CD release with Jorge Rossy on drums of the post Brad Mehldau era and presented the excellent drummer in a trio with Tomas Sauter (g) and Daniel Schläppi (b). The three musicians have made an outstanding reputation for themselves as virtuoso instrumentalists and bandleaders for many years now. In 2013 the brilliant triumvirate publishes its second CD Perceptions, whose title refers to the infinite variety of possibilities of sensual perception. And in fact the album offers a great number of striking tunes.

Sauter and Schläppi have played innumerable concerts together as a duo, and brought out two CDs, Indian Summer (2006) and First Day in Spring (2011), which were highly acclaimed by both public and experts. In trio with Jorge Rossy, the result of this long-term relationship can still be heard and gains a further dimension in its union with the brilliant drummer. Although all the musicians can let their artistic inspiration run free on this production, the three professionals obtain an amazingly compact and original band sound.

With the new CD Perceptions, the European jazz scene is giving a very strong signal to the New World. This music catches the listeners attention from the first to the last note. Not just because of the wonderful way the musicians play, but also because of Tomas Sauter's refreshing and authentic compositions. His pieces are at times impressively modern, at times light as ballads but they are always captivating and of a timeless beauty.

Between 1980 and 1989 toured and recorded extensively with most musicians in the spanish scene and some internationally acclaimed artists as Woody Shaw, kenny Wheeler, Jack Walrath, Dave Schinitter, Sal Nistico, Sean Levitt  and others.
In 1989 moved to Boston to study trumpet at Berklee College of Music.
In Boston Jordi became the drummer of choice for many of his peers and joined Danilo Perez trio for some gigs in Panama, France, Boston and New York, then joined Paquito D’rivera sextet for 2 years and moved to Ny City in 1991.
In Ny  Jordi played in the early recordings of many of his Boston friends like Mark Turner, Chris Cheek, Seamus Blake,  Kurt Rosenwinkel and some other musicians then living in the city like Brad Mehldau,  Ethan Iverson,  Reid Anderson, Avishai Cohen, Joe Martin, Freddie Bryant
Jordi also worked and recorded with Joshua Redman, Bill McHenry, Bruce Barth, Mike Kanan, Ben Monder, Nat Su, Steve Wilson, Mark Johnson, Larry Grenadier, Ben Street, to mention a few
In 1995 started touring around the world and recording extensively with the Brad Mehldau trio for 10 years .
During this time also toured and recorded with The Bloom Daddies an electric high voltage band lead by Chris Cheek and Seamus Blake, with Jesse Murphy on bass and a two drummer team with Jordi and Dan Reiser or later with Tony Mason.
Also in 2000 moved back to Barcelona to raise a family and to start focusing on piano.
in the las 10 years Jordi has been playing and recording on piano with some  bands like Jordi Matas Quintet or Joe Smith septet and several projects with Guillermo Klein, including a performance at Merkin Hall in NYC and the Library of Congress Auditorium in Washington DC.
Since 2006 Jordi has recorded is first album as a leader ¨Wicca¨ in trio with Albert Sanz on Hammond organ and RJ Miller on drums and also his second outing ¨IVLIANVS Suite¨ with the same rhythm section plus Chris Cheek on sax and Felix Rossy ( Jordi’s son ) on trumpet.
Jordi’s band has been touring around Spain, the east coast of USA, Marroco, Italy and  also performed  in 2010 in Basel Switzerland.
But during this time Jorge has also been busy playing drums occasionally with Lee Konitz and Ethan Iverson quartet, Charlie Haden’s Quartet West and Land of the Sun Septet, Carla Bley’s Liberation Orchestra, Joe Lovano’s Quartet Europa,  Kurt Rosenwinkel quintet,  Seamus Blake Quartet, trio 2000 with Chick Corea and NHOP and another  trio with Brad Mehldau and Charlie Haden. More recently played with Wayne Shorter Quartet in European Tour 2012.