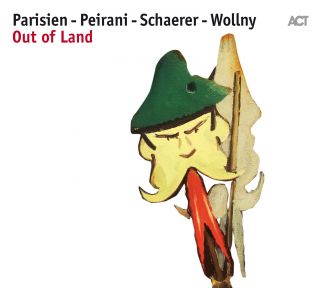 - Out of Land refers to a place of uncertainty, outside comfort zones, where things can go anywhere

- This summit meeting is a testament to the power, the thrill, the sheer tingle factor of live jazz

Here is a band for which the word ‘supergroup’ is completely appropriate. Swiss vocalist Andreas Schaerer, German pianist Michael Wollny, French accordionist Vincent Peirani and his saxophonist compatriot Emile Parisien are four of the brightest and most charismatic stars in European jazz, and they have now formed themselves into a quartet. Between them, they have so far garnered no fewer than twelve German ECHO Jazz Awards, as well as just about every distinction of importance in their own countries. They are in their mid to late thirties, and their new live recording “Out of Land” demonstrates why they are at the very pinnacle of jazz musicians of their generation. It is because they are redefining the possibilities of their instruments; not just cutting loose from the boundaries of jazz, but doing it in a way which energizes and inspires audiences of all generations. The pivot and connector for this top-flight group of musical allies and equal partners has been Peirani. He had previously played with all three of the others, and has brought them together. The quartet member he has had the closest connection with is Parisien: they have been kindred spirits since working together in Daniel Humair’s quartet. They work as a regular duo, and in the group “Living Being.” The four searched long and hard for the right name to put on their new band’s birth certificate. Schaerer sent Peirani a whole raft of suggestions, including the indeterminate “Out of…”. To which Peirani responded promptly with “Out of Land.” The phrase “Out of Land” is intended to bring to mind that specific sense of leaving solid ground, and of venturing into terrain where it is far from obvious how things are going to develop. That was certainly a part of the concept: staying open to the ideas of the others, keeping the excitement intact, seeing what will happen musically in the moment. They did three days of rehearsals without prior preparation, and then went off to appear on stage together. Schaerer found it fulfilling: “It is simply a dream, almost a spiritual form of making music. It’s about being able to address one’s own visions in conditions of complete spontaneity, and also about transparency of communication with the others. These musicians can really do that!”
Michael Wollny, born in 1978 in Schweinfurt, internationally successful jazz pianist, music inventor, unconventional thinker, popular figure. Nobody plays piano like him. His trademark: the unpredictable, the quest for the never-before-heard, the courage to devote himself to the moment, to make the unforeseen sound self-evident. His desire to keep reinventing himself, both in terms of sound and composition; that is what makes him a “consummate piano maestro” (FAZ) and “the biggest (jazz) musician personality that Germany has produced since Albert Mangelsdorff” (Hamburger Abendblatt).

Emile Parisien
The French jazz scene has a vitality, an originality and a do-it- all and do-it-anyway mentality about it right now. It is French musicians who are blazing the new trails for contemporary European jazz. There is a wonderful open-mindedness towards all musical cultures, genres and tendencies; and yet French musicians also give off the sense of having a proper grounding in their own tradition. A musician who represents all of these tendencies ‘par excellence’ is saxophonist Emile Parisien. Born in Cahors in the wine-growing region of the Lot, he is a jazz visionary. He may have one foot in that ancient soil, but his gaze is firmly fixed on the future. The leading French newspaper Le Monde has called him “the best new thing that has happened in European jazz for a long time,” while the Hamburg radio station NDR made the point of telling its listeners to give Parisien their “undivided attention.”

The reference points on Parisien’s personal musical map are very widely spread indeed. They range from the popular folk traditions of his homeland to the compositional rigour of contemporary classical music, and also to the abstraction of free jazz. And yet everything he does has a naturalness and authenticity about it. Rather than appearing pre-meditated or constrained, his music has a flow, he traverses genres with a remarkable fleetness of foot and an effortless inevitability.

What is it that makes the simple urgency of Parisien’s music quite so enjoyable? How does he manage to combine a provocative and anarchic streak with such a captivating sense of swing? Anyone who has seen and heard him on stage will know: it is because he lives his jazz with body and soul, because there is an authenticity and honesty inflecting every breath and every note.

Andreas Schaerer, from Berne in Switzerland, is one of the most talked-about vocal artists on the international music scene, and with good reason. He is considerably more than just a singer - and to classify him under jazz doesn’t really do him justice either. Schaerer uses his voice in the manner of a juggler, a magician. He can not only make it sound forth in contrasting stylistic idioms and vocal registers, (switching at will from songster to crooner to scatter), he can also produce all kinds of sounds and imitate a whole range of instruments. He can do beatbox percussion, or he can stack up polyphonic vocal parts on top of each other in a way which seems unfeasible. In addition to all that, he is also a hugely impressive composer and improviser, skills which he can bring to bear on all kinds of musical projects, where his virtuosity can be the key ingredient, either providing melodic form or rhythmic impetus. And his skills don’t stop there. He has considerable on-stage charisma, and also brings a rare gift into the world of ‘serious’ music: humour, which is the stock-in-trade of his main band Hildegard Lernt Fliegen (meaning Hildegard learns to fly).